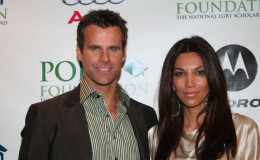 Cameron Mathison appeared on daytime from 1998-2011 as Ryan Lavery on All My Children. Mathison briefly left AMC for a year in 2002.

Vanessa Arevalo (Mathison) is a popular public figure being a super model for almost eighteen years of her career and now recognized as the officially wedded wife of the Canadian star and the television host, Cameron A. Mathison.

The couple has been happily married for fourteen long years and is having the best moments of their life with a perfect family and a successful career alongside.

Most of you might wonder who actually is Vanessa Arevalo and how she ended up marrying her handsome beau, Cameron? Well, we are here to answer all these questions in this section. Let's begin.

The "All My Children" actor, Cameron married his lovely wife Vanessa in 2002. Before tying knots, the pair were dating for a couple of years and eventually decided to share the lifetime of happiness together by exchanging vows.

They got married on 27th July 2002 and has been happily married since then.

The couple is still going strong together. Also, there has not been any rumors regarding their break-up or divorce and we can be assured that it's unlikely to happen in the future because the couple is still madly in love with each other.

They have been seen taking romantic trips and dinners to different places most of the time.

The couple is holding hands together like the teenagers. So cute!

Mathison's enjoying their vacation together

Monday through Friday this week on ET we give you a look at how celebs vacation... it was a tough assignment but my wife Vanessa and I were up for the challenge?????? #vacation #escape #husbandandwife #beach #relax #secrets

On an interview with YourTango.com, Cameron shared his memories of how he proposed his wife. He told the sources:

"We really fell in love on this one ski trip we took together. So, when I wanted to propose to her, I wanted to do it skiing. We went up to the top of Vail Mountain in Vail, Colorado, and I took her up to this remote summit, which was a beautiful place to take photos."

"I pulled out the ring and turned around and proposed to her with the camera taking a ton of pictures. Then, I had a big champagne lunch waiting for us at the bottom of the mountain. We skied down the mountain! It was really amazing."

The couple in an event, Source: Getty Images

The Couple shares Two Children together

Children always complete a family tree. The Lovely couple has two together together-welcomed their first child; a son on April 20, 2003, and named him Lucas Arthur other than his father's name he has also taken his father's good looks.....don't believe us then see it for yourself.

The pair also has a daughter named Leila Emmanuelle born on July 7, 2006. She is her Daddy's little princess and Her mother's pride.

Happy birthday to the sweetest girl I know?? Leila, today you turn 11 and I'm so proud of the incredible young woman you are growing up to be?? I love you so much ... happy happy birthday my sweet Lulu????‍??????????

They are such an amazing family and we just love to see them together.

"When things come up we just kind of figure it out, there’s no formula, we just roll with the punches. You just have to be so flexible."

To know more about this happy couple and relationship click here.

Here's a video of Cameron Mathison's performance in Dancing With The Stars Season 5.

Well, we really hope that the family stay and prosper together in every step of their lives. For more recent news and updates keep following our page!!