Home Article Actress Chloe Bennet and Austin Nichols are Dating. Are they getting married?

Actress Chloe Bennet and Austin Nichols are Dating. Are they getting married? 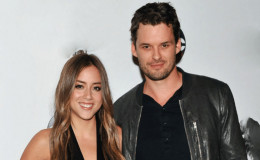 Austin Nichols is off the market! The Ray Donovan star and One Tree Hill alum is dating Agents of S.H.I.E.L.D. star Chloe Bennet, E! News has learned exclusively. The new couple have made no attempt to hide their new romance, as they were seen making out at a bar in Hollywood just a few weeks ago.

The popular American actress, Chloe Bennet who is famously known for her role as Daisy Johnson in the ABC spy-fiction series Marvel's Agents of S.H.I.E.L.D., is currently dating Ray Donovan star, Austin Nichols. The power-house couple is still going strong in their relationship without any rumors of splitting up or affairs.

The pair has been exclusively seen together in public, holding hands and walking together, hanging out and shopping. It seems like the cupid has really struck this adorable couple and we might also be hearing wedding bells anytime soon!

So without wasting any time, let's dig deeper and unravel all the details about their relationship and love life.

The most handsome and charming American actor popular for his portrayal as Spencer Monrow on AMC's hit series The Walking Dead is officially dating the prettiest actress Chloe Bennet since 2013.

The duo is hitting it off really well as they are often seen hanging out like a legitimate couple together.

According to sources, their relationship went exclusively when the pair were spotted kissing each other in a bar in Hollywood during September of 2013.

On this year's Valentine Day, they were again spotted together doing some shopping at The Grove on Sunday afternoon in West Hollywood, California.

The 23-year-old hot actress was walking hand-in-hand with the man of her life, Austin.

How did the couple meet?

According to UsWeekly, the pair first met each other in L.A. during the September of 2013. After their first encounter, the lovely Chloe and Austin were spotted a couple of times hanging out together.

Similarly, Elizabeth Henstridge, who co-starred with Chloe in Agents of S.H.I.E.L.D, posted some pictures on twitter of Chloe and Austin together along with some friends on 15th Sept. with caption "Things that get better with age; cheese, wine and laser tag,"

Things that get better with age; cheese, wine and laser tag... x pic.twitter.com/QhcENgLpe0

Since then, the pair has been cherishing their wonderful relationship to the fullest and are having the best times of their life.

Both of them are active on social media such as Instagram and YouTube and has been seen posting a lot of photos and videos together.

It's really been a dream come true to be able to compete in the #olympics this year. Thank you to #michaelphelps #katieladecky and @austinnichols for always being my top competitors. #gold

Are they getting married soon?

Well, it's obvious that the two make a perfect couple together and it would be amazing if the pair tied the bonds of holy matrimony.

Despite their incredible chemistry and unconditional love for each other, the pair has not announced any news about them getting married.

Also, rumors relating Chloe getting engaged or Austin proposing Chloe has not been heard so far. Their fans would be thrilled and exhilarated with the news.

However, as for now, it seems, the duo is taking things slow and enjoying themselves and working out their relationship before taking any big step.

After dating for almost four years, the couple broke up. After their separation, Austin started dating his new girlfriend, Hassie Harrison.

What a road trip. What a birthday. What a life. Thanks to this smoke show.

When it comes to Chloe, she dated famous You Tuber Logan Paul but separated soon.