Home Article Actress Idina Menzel divorced with husband Taye Diggs. Now she is engaged to Boyfriend Aaron Lohr and they might married soon.

Actress Idina Menzel divorced with husband Taye Diggs. Now she is engaged to Boyfriend Aaron Lohr and they might married soon. 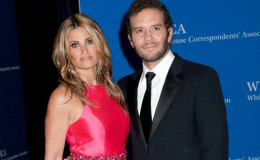 Currently, the ‘Frozen’ star Idina Menzel is the happiest girl on earth as she got engaged to her longtime actor boyfriend Aaron Lohr.

Previously she was married to Taye Diggs but the couple got a divorce after a decade of marriage.

The former couple first met when they appeared in the original production of the Broadway musical Rent in 1990.

They fell in love and got married on 11 January 2003. They are also blessed with a son named Walker Nathaniel Diggs born on 2 September 2009.

However, some people are not destined to be together forever and in 2013 the former rent co-stars announced their split and along with them, the Broadway fans were also devastated.

Before their divorce in one of the interviews with People regarding her married life, Idina said, “I’m not going to glamorize it or glorify it- we go through tough times like everybody else, but we love each other very much.”

She further added, “We try not to be away from each other for more than two weeks at a time, and we try to find new ways to communicate.”

However, it did not work out between Taye and Idina and got a divorce in December after spending 10 years with each other as husband and wife.

After the divorce, the 48-year-old actor said,

“I’d be lying if I said there weren’t times when I thought, “Oh man, people are going to trip out (if we split).” ‘Maybe they thought it was cute that we met in Rent.

According to them, the only concerned for them was their son; Walker as they did not want their child to face any sorts of problems because of his parents’ decision to separate.

Their divorce settlement documents revealed that they agreed to share the custody of their son and have decided to split all the costs of raising him.

Currently, both of them share a good bond and are happily raising their child together and have also moved on in their respective life. Tyga started dating model Amanza Smith Brown and Idina is now in a relationship with Aaron Lohr.

Just after the separation of Taye with his ex-wife Idina, he started dating model Amanza Smith Brown.

In 2014, he even made his red carpet appearance with girlfriend Amanza at the 2014 BET Awards at Los Angeles’ Nokia Theatre.

Recommended: American Actress Kimberly Hebert Gregory is living happily with her Husband Gregory, Do they have children? Know in Detail

The ‘Deal or No Deal’ model Amanza was previously married to former NFL player Ralph Brown and they also have two children together.

As of now, it is not clear whether Taye and Amanza are still dating or not but we hope they are living a happy life.

Idina Menzel and Aaron Lohr; Know About Their Relationship: Are They Married?

The pair first met when they co-starred in groundbreaking Broadway musical Rent. They started dating privately and choose a very high profile way to make their relationship public.

In 2015, they made their red carpet appearance at White House Correspondents’ Association Dinner in Washington, D.C. and officially came out as a couple.

Aaron and Idina have also been living together in LA’s Encino area where they bought a house in $2.675 million dollars.

Recently, the couple has announced their engagement. Idina revealed the big news by stating ‘What an incredible week. Thank you to everyone for all your support with the album.”

She further wrote, “As it this week couldn’t get any better I have wonderful news…..my man and I are engaged! We are so happy’ It’s a beautiful time.”

Menzel married Lohr over the weekend on 22 September 2017 at her own home in a private ceremony. Later, she revealed the news via a Twitter post on 25th September.

"Wanted to let you know… Married the love of my life #aaronlohr this weekend @ our home. Dad & son walked me down the aisle. It was magical."

No doubt the lovely couple is living a blissful married life as husband and wife.