Home Article After a Wrist Surgery and 40 Stitches in Her Face, Carrie Underwood is Doing Well Now: Reports

After a Wrist Surgery and 40 Stitches in Her Face, Carrie Underwood is Doing Well Now: Reports 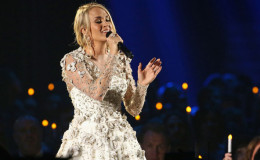 It was November when the storyteller singer, Carrie Underwood fell on the steps of her house getting 40 stitches on her face.

From sources, it was confirmed that the 34-year-old, Underwood broke her wrist after she fell from the steps of her house. Adding details about the incident, Underwood said that it severely damaged her face resulting several cuts on her face. Sharing details of the incident with her fan club members, Underwood explained how big was the damage made to her face that she had to go for over 40 stitches and wrist surgery.

There is also another part of the story that I haven’t been ready to talk about since I have still been living it and there has been much uncertainty as to how things will end up,” she added in her note given to PEOPLE, “It’s crazy how a freak random accident can change your life.

Furthermore, she added, “In addition to breaking my wrist, I somehow managed to injure my face as well.

Also Read: How much is the net worth of American Singer-Songwriter Carrie Underwood? Know about her Sources of Income in Detail

I’ll spare you the gruesome details, but when I came out of surgery the night of my fall, the doctor told Underwood’s husband, Mike, that he had put between 40 and 50 stitches in.”

Despite she is doing well now, Carrie Underwood could not perform in Nashville’s Bridgestone Arena on the country rising benefit show.

Addressing her fans in an interview, Carrie said that she will make a comeback on the silver screen in 2018.

I am determined to make 2018 amazing and I want to share things with you along the way. And when I am ready to get in front of a camera, I want you all to understand why I might look a bit different.

Back in January 2018, she warned her fans that she might look a bit different after the tragic accident. But she left her fans very much confused as she stepped into the spotlight with exactly the same face.

During an interview on The Ellen DeGeneres show, she said that she was so worried that her fans would assume she had plastic surgery.

"I feel like I do [look different] a little bit. My biggest worry at the time was like, if I say nothing, then later on… I feel like people are gonna say, ‘What has she done to herself electively?’ And it definitely was not a choice."