Northern Irish Actor Liam Neeson Dating Anyone After The Death Of Wife Natasha Richardson; The Couple Was Married For 15-Years; Share Two Children 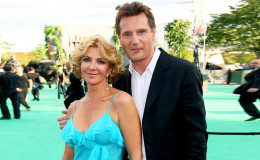 65 years old Northern Irish actor Liam Neeson isn't dating anyone right now. After losing his wife Natasha Richardson, he was in an official relationship with Freya St. Johnston for two years. Neeson is a proud father of two sons, Micheal and Daniel.

Liam Neeson is Northern Irish actor well known for action thriller movies such as Taken franchise, Non-Stop, Unknown, The Grey, etc. The Taken star was married to Natasha Richardson and fathered two sons with her.

His marital relationship with Natasha ended due to her tragic death. If you are curious to know about the details of his marital life, romantic relationship, and affairs; we got you covered.

65 years old Northern Irish action star Liam Neeson is currently single and isn't dating anyone. In May 2018, he was spotted by a fan walking alone after picking up his mail from the long driveway.

As per the report, Neeson is currently busy with the Hollywood projects like The Trainer, Widows, The Last Horsemen of New York, untitled project and spin-off of Men In Black.

He doesn't use social media much and doesn't like to reveal much about his private life to the public. The star who often portrayed the role of a life-saver in his movies has a qualm about his failure to save the life of his dear wife. He still recalls golden memories and good times spent with his late wife and becomes emotional. 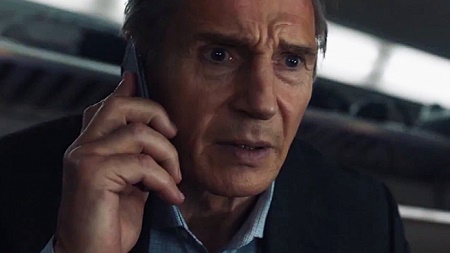 Liam Neeson in a scene from his 2018 movie The Commuter
Source: Den of Geek

After losing his wife Natasha Richardson, Liam Neeson didn't date anyone. However, slowly he opened his heart to British publicist and PR executive Freya St. Johnston. So far, Neeson's relationship with Freya is the only confirmed relationship after the loss of his wife.

As per the report, Neeson met Johnston back in 2010 and was smitten with her. They haven't exactly shared how and when they met in 2010. The pair started going out on date numerous times and were seen by paparazzi during dinner, shopping and movie date many a time. 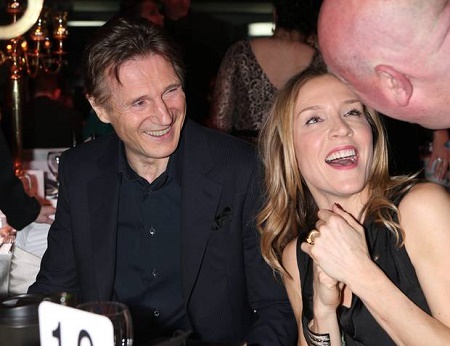 Neeson and Freya started dating officially from September 2010. It is believed that their relationship was of long-distance nature as Neeson was based in Ireland and Freya was in America. During the course of their relationship, they enjoyed each other's company a lot and took time out from their schedules to meet each other.

It is speculated that with Freya, Neeson was able to heal the void left by Natasha's death. Neeson and Freya were spotted together while going on vacation to undisclosed locations.  During the filming of Red Nose Day Actually, Neeson was spotted having fun with Freya.

After the shooting of Red Nose Day Actually was over, Neeson was photographed playing with Freya. They seemed to be in deep love with each other. At one point, it was even assumed that they might tie the knot soon.

Neeson and Freya split up in the year 2012, after dating for two years. The reason for their break up hasn't been revealed by both parties. But, they remained good friend with each other, even after their break up.

However, in 2016, it was claimed that Neeson and Freya were back together for a while. They were seen hanging out and getting cozy with each other during a party. 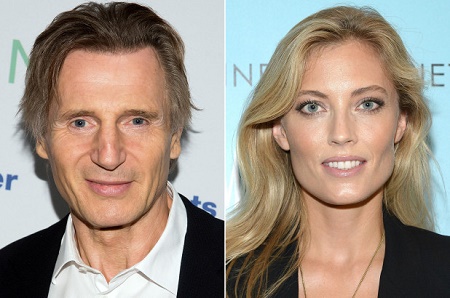 In 2017, it was rumored that Neeson was dating newly single actress Naomi Watts. In the same year, it was speculated that he was dating Twilight fame actress Kristen Stewart.

Another speculation that made the buzz in social media in 2017 was Neeson's relationship with model Jennifer Ohlsson. As per the rumor, they had a fling for an unknown duration in 2017.

Liam Neeson was in a marital relationship with fellow actress Natasha Redgrave Richardson for 15 years; until her untimely demise. Neeson and Natasha met each other during the performance of Broadplay stage play Anna Christie in the year 1993. At that time, Natasha was married to producer Robert Fox; yet that didn't stop them from falling in love. 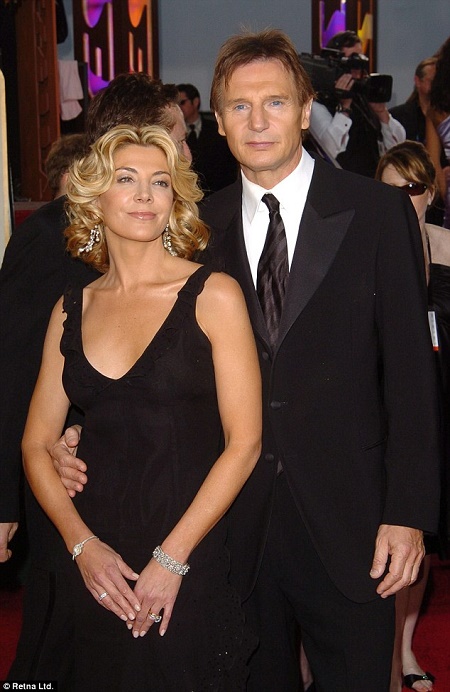 Liam Neeson with his wife Natasha Richardson during an event
Source: Daily Mail

Neeson and Natasha shared amazing chemistry during their stage performance and instantly were smitten with each other. They not only impressed each other during their stage show but also enthralled audiences and critics alike. Their performances earned them both nominations for Tony awards. During that time, Natasha was only 29 and Neeson was 40 years old.

They shared amazing chemistry not only in reel life but also in real life. Their marital relationship was built on mutual love, respect, trust, admiration and they didn't have to compromise on anything. They didn't let the smallest tiffs and couple fight break them apart. Their bond deepened with each passing day. 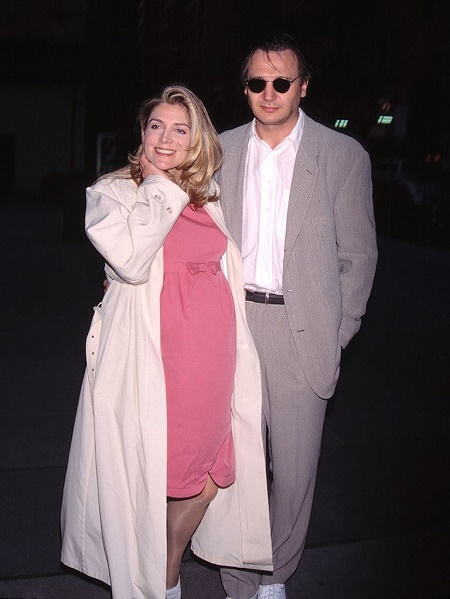 Neeson's popularity and notoriety as ladies' man didn't deter Natasha from falling in love with him. After finalizing her divorce from Fox, Natasha began dating Neeson. Neeson and Natasha tied the nuptial knot in a ceremony in upstate New York in 1994; one year after their first encounter. After tying the knot, the couple was cast alongside each other in the movie Nell. 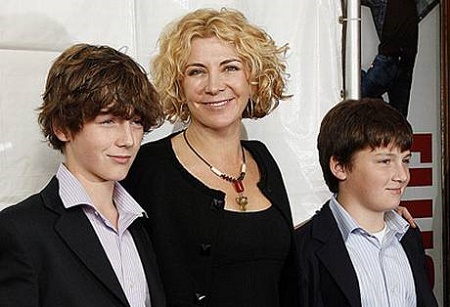 Natasha Richardson with her sons in a file photo
Source: Pinterest

The couple lived a happy marital life and later became parents of two sons. Their eldest son Micheal Richard A. Neeson was born on 22 June 1995 in Dublin, Ireland. 18 months after the birth of their first son, the couple were blessed with their second son Daniel Jack Neeson on 27 August 1996 in New York City. 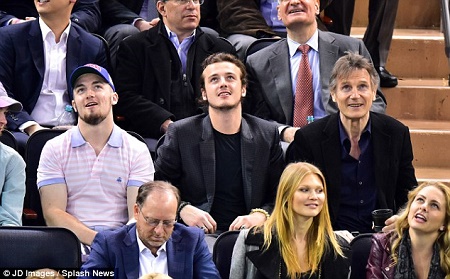 Neeson with his sons Micheal and Daniel during a Game
Source: Daily Mail

In the year 2009, Natasha died at the age of 45; after succumbing to the fatal head injury caused by a skiing accident at Mont Tremblant Resort, northwest of Montreal, Quebec, Canada. Liam rushed to be by his wife's side, canceling shooting of his movie Chloe in Toronto. Upon arriving in the hospital room, Neeson found out that she was brain dead and had zero chance of survival.

After conducting an autopsy on her, The New York City Medical Examiner's Office confirmed that Natasha's death was due to epidural hematoma, caused by blunt head injury during a skiing accident. New York City's Greenwich Village Funeral Home handled her funeral.

"She and I had made a pact, If any of us got into a vegetative state that we'd pull the plug. So when I saw her and saw all these tubes and stuff, that was my immediate thought."

Natasha had promised to donate her organs in the case of her death. After her death, her donated organs helped save lives of three people. 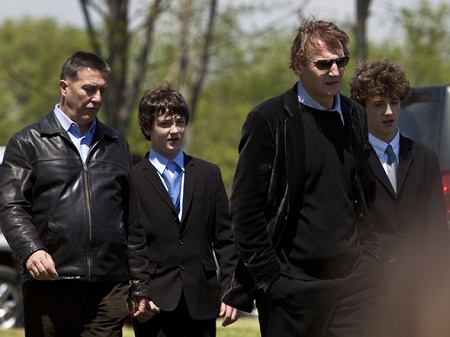 Liam Neeson raised his son alone as a single father after Natasha's death. Neeson's struggle of raising his sons is almost identical to his role in 2003 movie Love Actually, wherein his character of a widowed father Daniel struggle hard to raise his stepson Sam.

Liam Neeson's Past Affairs and Relationship

Before he fell in love and married Natasha, Liam Neeson was in a relationship with actress Helen Mirren. The couple bonded well and instantly fell in love during the shooting of 1980 film Excalibur. They shared amazing chemistry in the movie and had good moments in the movie set.

In 2018, while promoting Mirren's Winchester and Neeson's The Commuter on The Graham Norton Show; Mirren opened up about their relationship and confessed that they had a live-in relationship for four years. 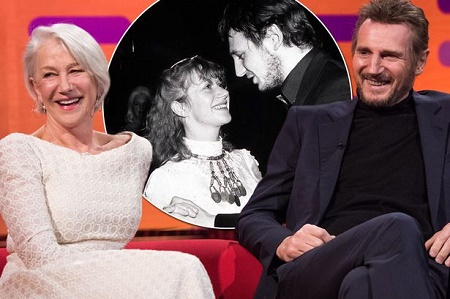 Remembering their early days, Neeson recalled that he was unable to find a decent role in London, after moving in with Mirren there. As Neeson wasn't able to find good role due to Mirren's overshadowing popularity, they split up in 1994.

Aside from Helen Mirren, it is reported that Neeson had affair with the bevy of beautiful ladies such as Narnia actress Laura Brent,  Brooke Shields ( in 1992), Jennifer Grey (early 1990s), Julia Roberts ( 1988-90), Janice Dickinson and Barbara Streisand. 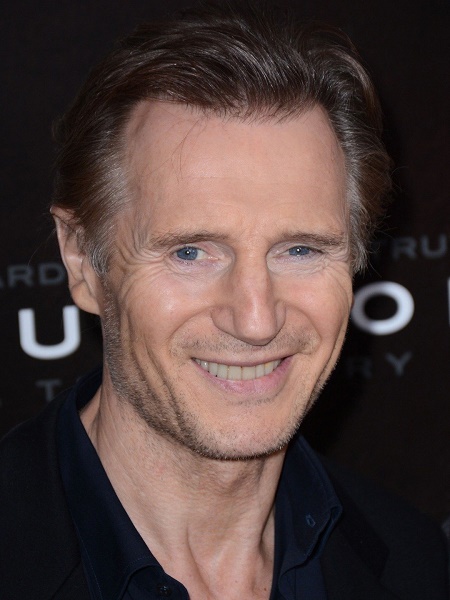