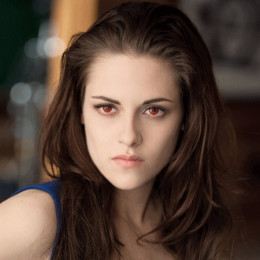 Kristen Jaymes Stewart is an actress, who is widely famous as Bella Swan from The Twilight Saga film series. She is the "face" of Chanel and Balenciaga fashion brands. She is the recipient of the Rising Star BAFTA Award and a Cesar Award. She is the daughter of Jules Mann-Stewart, a script supervisor and John Stewart, a stage manager and television producer. According to Forbes Magazine 2012, she was ranked no.1 on the list of Hollywood's Top-Earning Actresses.

Talking about her personal life, she hasn't been married to anyone yet.

In her past days she had dated lots of popular guys. Till now she hasn't been a part of any controversial issues. She has no any child from any of her affair.

Previously she dated some of the famous stars including Robert Pattinson and Michael Angarano.

During an interview on Saturday Night Live she described herself as "so gay". While talking to The Guardian, she clarified that she is a bisexual. She said,

"You're not confused if you're bisexual. It's not confusing at all. For me, it's quite the opposite."

The same year she mentioned that she is open to date men again. She said,

"I want to try everything."

In 2016, she began dating New Zealand model Stella Maxwell. The couple broke up in December 2018.

She received several accolades including a Cesar Award which is equivalent of an Academy Award. She became the highest paid actress in the world in 2010 and 2012 as her movies grossed $4.3 billion worldwide.