Home Article American actress Cassidy Erin Gifford in a blissful Relationship with Boyfriend; Is the Pair getting Married?

American actress Cassidy Erin Gifford in a blissful Relationship with Boyfriend; Is the Pair getting Married? 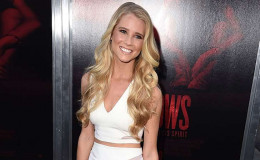 American actress Cassidy Erin Gifford keeps a close-knit personal life and she doesn't talk much about her boyfriend in the public.

Her fame is pretty much taking over the internet after her sensational role in the horror movie, The Gallows. The actor is in a blissful relationship with her boyfriend who happens to be a football player.

So who is the lucky guy? Let's find out.

Cassidy Gifford In a Blissful Relationship

The 25-year-old actress enjoys a beautiful relationship. Though Cassidy seldom talks much about her relationship, her Instagram profile speaks a lot.

Cassidy Gifford, her boyfriend Addison Pierce during their vacation.

The blonde-haired is currently in a relationship with a handsome student and football player Addison Pierce. Just like her late father, Frank Gifford, Cassidy's boyfriend is also a football player by profession. He plays for the University of Middlebury.

Discover: Actress Natalie Portman and her husband Benjamin Millepied having the second baby after son Aleph

She shares a lot of adorable pictures with her boyfriend on Instagram.  Pierce appeared in Cassidy's socials since 2014. However, through one of her post, it became more clear that the pair were in a relationship since 2013.

Back in 2017's Valentines Day, Gifford uploaded a picture with her darling wherein the caption. She mentioned it was their fourth Valentines together. Surprisingly enough, back on 2 January 2015, the starlet took a picture where she and her darling can be seen madly kissing each other.

The duo is an epitome of cuteness whenever they are together. The duo looks like they are made for each other and her fans are way too happy for her relationship.

Some random monkey and a piglet doin' the damn thing @dsondeezy

The cupid is dating for more than 5-years now. Her fans believe it's about time they get engaged and married. But seems the duo has some other plans.

Her boyfriend is currently planning to make it big in football. Moreover, she is still pretty much young in the entertainment industry so she would want to further her career.

You May Also Like: Disney Channel actress Sierra McCormick is already 18 and don't have a boyfriend or an affair

At present, the pair seems so much in love. Her fans believe that the pair will get married soon in the upcoming days. Cassidy and her future husband aren't in a rush to get married nor they have any children. They are united as a life partner for over seven years now. Assuming their chemistry and affection for one another, there are fewer signs for the couple to split.

She started out her career in the Disney TV series, That's So Raven. She played a small role in the episode named Dog Day After-Groom. She also played in the series, The Suite Life on Deck.

She got her big start in 2011 movie, Adventure of Serial Buddies. She played the role of Hannah. Back in 2015, she was also named in Esquire's list of "18 Beautiful Women America Won't Be Able to Resist This Summer."

She became famous for her role in the Horror movie, The Gallows. You can watch her talking about her movie The Gallows in the video above.