American Football Player Antonio Brown Father of Five Children;Has He Turned Girlfriend Into Wife; Know About His Past Affairs And Relationship Rumors 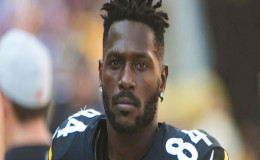 Antonio Brown is in a long term relationship with his long term girlfriend Chelsie Kyriss and they both have three children together. He also had two kids with his former girlfriend Shameika Brailsford.

Children are considered a gods gift and proof of the existence of any love. Their innocence is a precious thing and for any parent or anyone in a relationship, a child should always come first before anything else.

Antonio Brown is an American football player who is a father of four. He seems to understand his kids and is keeping them at a priority despite issues with their mother.

Let's take a close look at his personal life and find out what's the dispute between the mother of his children.

Updated: Are Antonio Brown and girlfriend Chelsie Kryiss still Together?

Antonio Brown, an American football wide receiver disclosed his 2020 resolution "No More White Woman 2020" via Twitter on 12 December 2019. Is he really fed up with white women? what has happened between AB and Chelsie Kryiss?

The lovebirds who met through a mutual friend in 2011 are no more in a relationship. Post the split, the pair have been trading non-stop barbs via social media against each other.

On 14 December 2019, Antonio claimed that Chelsie Kyriss had called the cops on him three days in a row. He tweeted:

Brown added, Chelsie was blocked on his gate staying in hotels. The athlete asked her father Todd Kryiss to be a responsible father and also take his daughter with him.

YouTube: AB Kicks "BM" Chelsie Kryiss Out of His House!

Brown sent Kryiss an eviction notice, urging that she leave his home or he'll file a lawsuit against her. Further, the baby mama fought back saying she has the pictures which would end his entire life. That's not all, the Internet took Chelsie's side when Brown publicized their tumultuous breakup on social media.

Antonio Brown, Pro Bowl star who recently gone through a split with Kyriss is dating Stephanie Acevedo, a singer and VH1 cast member since December 18, 2019. He shared a cozy picture with new ladylove writing, "Iknowisaidit NoWhiteWomen2020". Meanwhile, one of his fan followers replied, Brown, is not attracted to dark-skinned women. AB and Steph began appearing on one another's socials from late December.

Antonio Brown Relationship With His Girlfriend; Shares Three Children With Her

Antonia Brown is in a long term relationship with his girlfriend, Chelsie Kyriss. She is the mother of three of his children and according to her, they have been together for more than six years.

The couple welcomed a new family member in August 2017. And both are happy with the new addition, especially Antonia as he seems to love kids.

Antonio already had two kids with her, named Autonomy and Ali. The newest member's name is Apollo and it added a bundle of joy in Antonio's life. Tmz also tweeted about the birth of his new child.

But before their happy life, they took a little break in 2017. Chelsie was pregnant with their third child at that time. During the break, Brown started cozying up to the Instagram model Jenna Frumes. Kyriss wasn’t happy about it and she took to Instagram herself to defend her relationship with Brown.

She deleted her Instagram account since then and after some time he came back to her. At present times, they both seem to be happy together as far as we know.

After they reconciled, her appearance on his Instagram started growing. He also shared a picture of the family celebrating Christmas.

Wishing you a Merry Christmas from my family to yours! (See you soon baby girl @antanyiah)

Although they have been together for so long and have kids together, they still aren't married. His friends keep telling him to pop the question but for some reason, he seems hesitant.

Antonio Brown Past Affairs And Children With His Ex

Antonio Brown has his fair share of ex-lovers and it would be wrong to accuse him only. As women are throwing themselves at the athlete, it's hard to reject the temptation.

His love life is not the most silent or uneventful you will hope to have. There were many several rumors regarding his relationships, though, many were false accusations. But that doesn't mean there weren't true ones.

Among the real ones, the most notable was with his ex-girlfriend, Shameika Brailsford. The couple is a parent of two children.

Must read: Actor David Dawson keeps his love life secret. is he gay??

Antonio has a boy named Antonio Jr. and a daughter named Antaniyah with her. Despite their breakups and conflicts, they still love their children and share their joint custody. In addition, Antonio and his ex-girlfriend are facing several conflicts regarding the child support that Antonio is entitled to pay.

Take a look at why Antonio Brown said that his 9-year-old son should 'Stay the F**k from Around Me'!

Whatever the problems may be, one can only hope that things don't turn to the worst and affect the future of the kids. For now, his fans can hope they resolve their conflict as soon as possible.