American political aide Sean is known for her time of service as the communications director of the Republican National Committee between 2011 and 2017. Spicer also worked as its chief strategist from 2015 to 2017.

Like his career, Sean maintained a smooth personal life after getting hitched with the love of his life. Admirers of Sean, questions, 'Who did Spicer married to?', 'Are they still living together?'.

Let's take a glance at Sean Spicer's married life including his married relationship and current affairs. 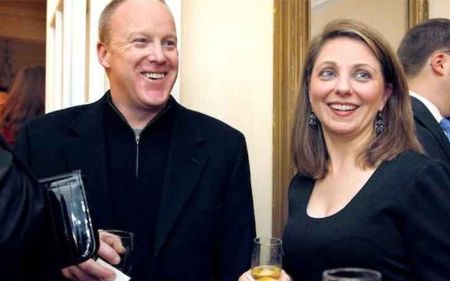 Sean walked down the aisle with his longtime girlfriend turned spouse Rebecca Miller on November 13, 2004. As a matter of fact, Rebecca worked as a TV producer at that time and both of them were aged 33 at the time of their nuptials.

Recommended: 23 years Thomas DiMassimo, The Controversial Student who allegedly tried to attack Donald Trump. Know How Is He In His Personal Life

Above all, the lovebirds tied the knot in a low-key wedding ceremony that took place at St. Alban's Episcopal Church in Washington, D.C. Reportedly, the vow got officiated by Episcopalian and a Roman Catholic priest of the church.

Together, the duo crossed a long journey. In the meantime, the birth of their two children bonded their chemistry even tighter. However, Sean and Rebecca remain cryptic about opening their personal information including the names of their children to the media. 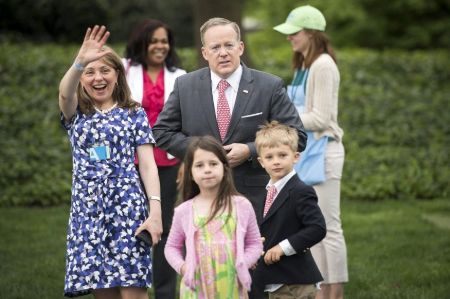 Sean Spicer with his wife and children.

Nevertheless, the senior vice president for the National Beer Wholesalers Association, Rebecca and her husband Spicer enjoy a beautiful time at their home in Alexandria, Virginia. As of now, there are no controversy and extramarital affairs that may hinder their romance.

All in all, we just wish a happy long life journey to the lovely couple of two.

Despite his resignation as the White House Press Secretary, the American Political aide joins the cast of ‘Extra’ as a special correspondent.

Sean, 47, signed the contract with the cast of the entertaining show, Extra this February. Well, the gossipy-lifestyle show that first released on ‎September 5, 1994, delivers the hottest topic news including scandals, videos, movies, games, music, television, star sightings and many more!

You May Like: This Year's Oscar was more political than before; From Jimmy Kimmel speech to Political Activist Five Political Moments from the Oscars

Sean appeared on his first interview on February 20 this year alongside the Secretary of State Mike Pompeo and his wife Susan Pompeo.

Sean shall appear on further talk time in the future. Yet when asked about how long will it be for him on the show the political aide admits it might be limited as long as he started taking one thing at a time! 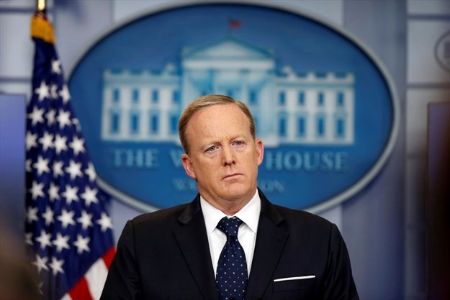