Where is Anette Qviberg Today After Divorcing Ex-Husband Dolph Lundgren? 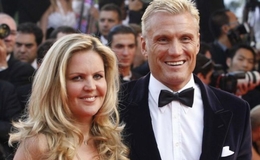 Anette Qviberg and Dolph Lundgren were happy with their married life before they divorced after 17 years of togetherness as husband & wife. What was the actual reason behind the separation of Anette from Dolph? Is she dating anyone in recent days? Find out below.

Speaking of her relationship status, Anette Qviberg was once a married woman. Anette Qviberg, a fashion and furniture designer, is indeed prominent for being the ex-wife of one of the legendary Swedish actors, the one and only Dolph Lundgren.

Moreover, Anette walked down the aisle with her boyfriend turned husband, Dolph Lundgren, in 1994. 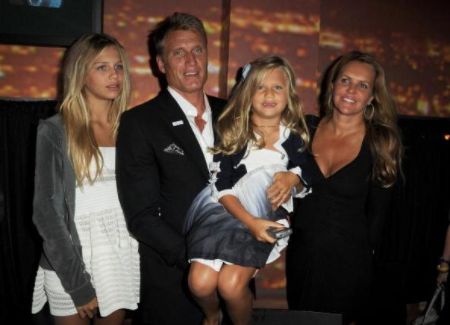 Additionally, the two dated for a few years before the former lovebirds got hitched on 27 February. The former couple shared the vows in lavish weddings in Marbella in the company of close friends and relatives.

Together with her, Anette gave birth to two beautiful daughters namely Ida Sigrid Lundgren on April 29, 1996, and Greta Eveline Lundgren, on November 30, 2001.  The former husband and wife enjoyed marital bliss for 17 years before deciding to get a divorce.  In the early months of 2011, the divorce was finalized. However, the reason behind the split is not disclosed. 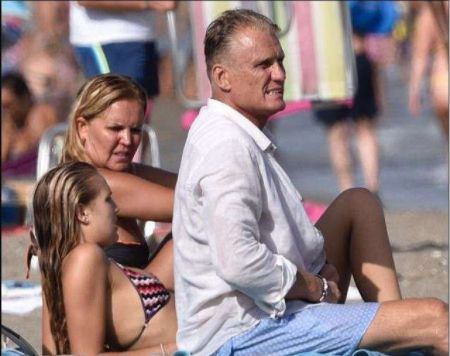 Despite being separated, Anette & the Swedish actor always maintained a friendly relationship. The duo got snapped attending various events together. What's more, the estranged husband and wife were also pictured having a good time together with his eldest daughter Ida Lundgren in Marbella beach, Spain, in 2017. The connecting link between the ex-couple is said to be their daughters.

Nevertheless, Dolph also provides his daughters with all love and support. As for now, Annette Qviberg is single and not dating anyone. However, her ex-spouse Dolph got engaged with his 38-year-young fitness trainer Emma Krokdal.

Previously, Anette's ex-husband Dolph Lundgren was married to his first wife, Peri Momm, in 1991. But only a year after their marriage, Dolph & Peri decided to part ways in 1992. 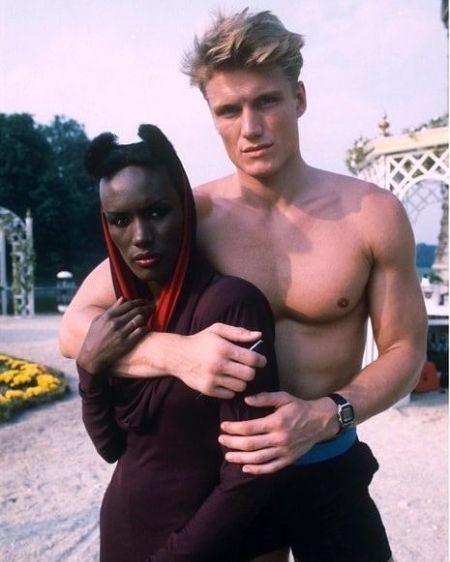 Dolph Lundgren with his ex-girlfriend Grace Jones in the 80s. SOURCE: Pinterest

Before his marriage to Anette, Dolph also had a romantic relationship with Grace Jones, an American-Jamaican model & singer. But their relationship couldn't last forever, and decided to break up. Then, Lundgren started dating Paula Barbieri, who is a former model and actress.

Following the divorce with Anette, Dolph came romantically closer with beautiful Jenny Sanderson in mid-2011. But Dolph couldn't continue his relationship with Jenny & broke up in the year 2017.

Swedish actor Dolph came into another relationship with Emma Krokdal after a heartbreaking split from Jenny. Dolph, in the interview, said that he and the Norwegian personal trainer Emma Krokdal, who live together with him in California, are a perfect match. 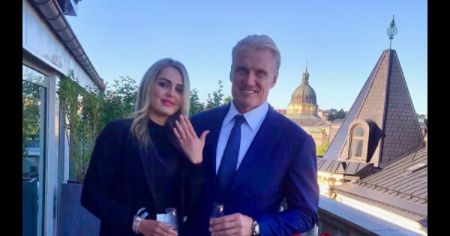 In addition, Dolph fell head over heels for Emma, who is the same age as Dolph's eldest daughter Ida, after meeting her at their gym in 2019. Hollywood action hero Dolph Lundgren claims his 24-year-old fiancee has changed his life despite their 38 years age gap. In June, Dolph proposed an expensive engagement ring in June 2021 in Stockholm, which Emma accepted without any displeasure.

Likewise, the news of their relationship broke out in public after Dolph & Emma attended the Cana Dorada film and Music festival together in the Dominican Republic in January 2020. Nonetheless, Emma & Dolph have bonded well over their shared love of training & self-care. Clearly, the relationship between the two is stronger than ever.

More About Anette Qviberg - Net Worth

American fashion and furniture designer Anette Qviberg has summoned an estimated net worth of around $2.5 million. As of 2022, Anette pockets an average salary of a fashion designer which ranges up to $68,862 per year & an annual earning of around $61,000 from the furniture designing profession.

Check out below the video of Dolph Lundgren and Sylvester Stallone rewatches Rocky IV.

Meanwhile, her ex-husband Dolph Lundgren, a Swedish actor, director, screenwriter, producer of films, and martial artist, possessed a whopping $18 million net worth. Most of his earning came from his acting credits and hit movies such as A View to Kill, Rocky IV, Masters of The Universe, and many other more.