Home Article Wedding rumors surrounding Michelle Beadle and boyfriend Steve Kazee: The couple is dating for a while

Wedding rumors surrounding Michelle Beadle and boyfriend Steve Kazee: The couple is dating for a while 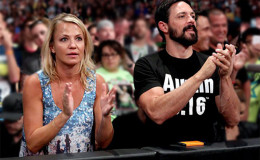 Michelle Beadle is currently in a relationship with boyfriend Steve Kazee. Sharing the same interests does mean that the relationship is going well. Let us find out more.

Michelle Denise Beadle is a reporter and a host currently working on ESPN Network. She is currently co-hosting SportsNation with Marcellus Wiley. She is currently in a healthy relationship with American actor and singer Steve Kazee and currently, there is a rumor surrounding the couple that they are getting married. Let us find out the truth.

Michelle is currently dating Grammy Award-winning singer Steve Kazee. The couple has been in a relationship for a long time. Both of them look so cute together and both of them share many similar interests.

Both of them look so cute together and both of them also share many similar interests.

Michelle is known for her love for dogs and wrestling and so did Steve. Both of them share similar interest and it seems as if both of them were meant to be together.

Michelle is a very hardworking reporter as she is always focused on her job and nothing else. But whenever she has free time she can be seen hanging out with her friends and family.

She is often spotted with her boyfriend as they party during weekends, or go shopping together.

Recently, they were spotted in the WWE Wrestlemania. She gave an after show interview about the Pay per view.

Steve once tweeted about him and Michelle and it shows how much happy they are together.

Clearly I should have won the @ESPYS award for "Luckiest Guy in LA" last night @MichelleDBeadle pic.twitter.com/WFfsjAEm9o

Previous Relationship between Michelle and Steve

Michelle has never been into a relationship with anyone if we go by her records. She has never fully disclosed her personal life to the public. She was always focused on her job and her reporting skills prove it all.

Her reporting skill is just pure class and that may be the reason she has been the face of ESPN ever since.

As for Steve, he also has not revealed many private things of his life. The couple has not decided yet if they will marry soon or sometimes later. We are sure that if they ever decide to do that they will let us know.

As of now, they are very happy together and are in no rush to tie the knot anytime sooner.