Home Article Who is Atsuko Remar? Also know about her husband and children

Who is Atsuko Remar? Also know about her husband and children 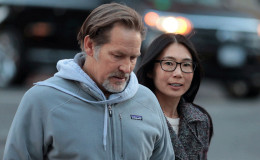 Finally, Atsuko Remar is living happily married life with her husband James Remar and with two children, besides this they are very supporting and understandable couple.

Atsuko Remar is a simple and a charming person with the humble personality. She is beautiful with the East Asia facial features who is known as the wife of famous American actor James Remar. Her husband James is well known for his role in the popular American series Sex in the City. The couple is living happily together in an apartment in California.

The love bird is often seen in the public places spending quality time with each other. They are so perfect for each other that even after so many years of togetherness there have never been any rumors of them getting a divorce.

The duo has been blessed with two adorable children. They have a son named Jason Remar and a daughter named Lisa Remar.  The family of four is undoubtedly one of the most beautiful families ever.

An American actor and voice artist, William James Remar is popular for his role in Sex and the City, The Cotton Club, and Vampire Diaries co-starring Paul Wesley and Nina Dobrev. Remar was encouraged to be an actor at the age of seven after seeing the movie Spartacus. James is mostly popular to play the role of a bad guy in major films.

However, Remar has also performed in several TV series including Sex and the City, Tales from the Crypt, Hill Street Blues, Third Watch and Battlestar Galactica. Although, he was also featured in the video games.

Not to mention, Remar is also best known for his role in Dextar where he starred for more than 90 episodes. Well, Remar was a part of the show for eight seasons until it concluded in 2013. However, Remar confirmed to a fan that he wouln't be returning for the ninth season of the show in 2020. Apparently, while Remar was offered to reprise his role, the actor denied as he wanted a different story for his character.

Similarly, he has been nominated for the SAG award and the Emmy. In recognition for his work in Sci-Fi Fantasy and Horror, he was also honored with the Saturn Lifetime Achievement Award.