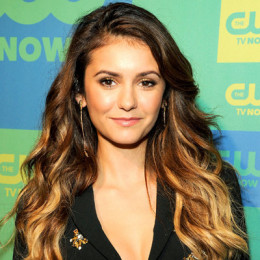 Born as Nikolina Konstantinova Dobreva, Nina Dobrev is a Bulgarian Canadian model and an actress who is best recognized for appearing in the supernatural drama series Vampire Diaries as Elena Gilbert which is still airing. She was born to a computer specialist father, Konstantin Dobrev, and an artist mother, Mihaela Dobreva. She took acting classes from Armstrong Acting Studios in Toronto. She has majored in sociology from Ryerson University.

She is currently single. She has never been married nor has any children from any of the affair. She usually comes in news with the rumor of her dating with different men.

#Repost @calvinklein Cafe #cool @nina is comfy and #coordinated in our #PreSpring2019 intarsia jacquard sweater for @wmag.Share your #winterwear with us #205W39NYC

She has been rumored to be in a relationship with several of the men like Zachary Levi, James Marsden, Liam Hemsworth, Alexander Ludwig, and several others. She has also dated quite a few men for the long and short term.

Nikolina Konstantinova was born on 9 January 1989 in Sofia, Bulgaria.

She is best known or her role on The CW's supernatural drama series The Vampire Diaries.

Grew up with a brother named Alexander Dobrev.