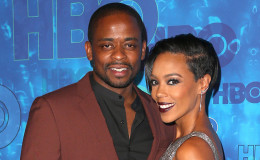 A shower to remember!

Jazmyn Simon celebrated a lavish bridal shower prior to her nuptials with fiancee, Dulé Hill. The intimate ceremony took place on March 24.

But it wasn't until today that she decided to disclose all the small details from the shower. 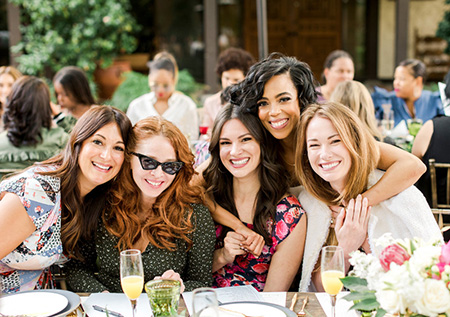 Simon posing with her friends during the bridal shower
Source: US Magazine

Jazmyn and Dulé choose The Garland located in North Hollywood, California. In an interview, with the US Weekly, talking about what made them choose this location, she stated,

“When I was picking a venue for the shower, it just felt like the right place to be, because not only do we go there, but in the ‘90s when Dulé was only 15 years old, he came out and tested for a show and he stayed there. I felt like it was very full circle for us to have the bridal shower there.”

The full event was planned by Chic Celebration. Simon was fully satisfied with the venue and divulged everything she'd planned was up to the mark and they left no stone unturned to make the venue beautiful and remembered for many years to come.

50 of her closest friends were in the attendance. The guest list included Grace Byers, Maggie Lawson, and Bresha Webb. As for the dining, the guests were provided with the three-course meal.

The champagne glasses were engraved with #SimonSaysHills and Delovely Details designed it.

The first course included Avocado Toast and then a crab quiche. The dessert included beignets and banana bread and pastries courtesy of Lou the French On The Block.

Her best friend, Jocelyn McKinney led the toast. According to me,

“[It] was emotional for me, because we've been best friends for almost 20 years. She said that Dulé was my soulmate, and that I was his soulmate."

The actress looked beautiful in an A.L.C top and high-waisted white pants along with a yellow Christian Louboutins. She got engaged to Hill last year in April 2017. She first met him during a lunch date in Miami.