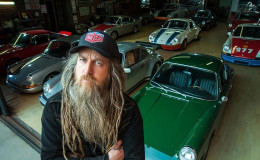 One cannot fall back from the trap of name and fame one way or another. It’s even easier to climb up the mountain if someone carries you to the top. Similar is the journey of famous British Fashion Designer and car collector Magnus Walker’s whose clothing brand has been worn by famous artist like Bruce Willis and Madonna.

The Porsche collector Magnus Walker aka Urban Outlaw suffered from the tragic loss of his former wife Karen Ann Caid Walker. Regardless of his professional career, his admirer's heart pops up with enthusiasm about what has he be doing after the death of his ex-wife, Karen? Has he married again or is he dating anyone?

Magnus Walker was married to his wife Karen Ann Caid Walker until her demise on October 28th, 2015. They had been married for more than two decades at that point. Karen worked with Magnus supervising tasks at Serious Clothing Brand.

It was her decision, that Magnus purchased the famous brand that would transform his life but who would've known that this adventure will have a tragic end. His wife tragically passed away in the year 2015.

After the sudden loss of his love, he shared news on his Facebook wall where he wrote,

"My soul mate, best Friend, partner, & beloved wife of 21 years is no longer with us. My life will never be the same again - although " my Lil Georgia Peach will always be in my heart" I would only ask to respect my privacy during this mourning process. Many thanks for your support"

The Porsche fanatic, Magnus only requested to be left alone to mourn in private however he didn’t go into details on the reason behind his wife’s death.

You know it’s love when he silently passes you his own pat of butter the moment you reach for a second roll ;)

Despite the fact that he had tremendous affection with his ex-wife Karen Ann Walker, today, Magnus Walker is involved in a romantic entanglement with Hannah Elliott who works as an editor with Bloomberg Cars.

Magnus Walker, 51 is from Sheffield, England.  As a 10-year-old kid, he was fascinated by the Porsche 911, which he saw with his dad at Earl's Court Motorshow. He even composed a letter to the vehicle company requesting for a job, to which they answered composing that he could apply for work when he had completed school.

Magnus joined some heavy metal and punk rock scene after dropping out of school in 1982. Later, he got a job as an instructor at a Detroit summer camp and relocated to LA at the end of the summer camp.

After moving to the United States in 1986, he established the Serious Clothing Brand. Finally, his hard work paid off after his designs were worn by the Queen of Pop – Madonna, Alice Cooper, Bruce Willis and some more.

It covers all the senses Thanks @porsche_norge #porsche

To grow his business, he began a huge factory in the Los Angeles Arts District, which has been utilized as shooting sets by different famous people like Victoria Beckham, Prince, and Jay Z.

Later the company was sold by him and his wife, Karen. In 2014, he shared his success story in a TED Talk titled "Go with Your Gut Feeling" at UCLA.

On June 1, 2017, he distributed an autobiography Urban Outlaw: Dirt Don't Slow You Down. All through his journey, he has remained a Porsche fanatic and gathered more than 25 cars which cost around a whopping $7.5 million.

Today, the famous British fashion designer Magnus Walker is unmarried and is busy with the other love of his life, his clothing brand, and Porsche car collection.