CNBC Journalist Morgan Brennan married to Matt Cacciotti and gave birth to the baby Girl in 2016. 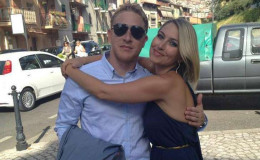 She married Matt Cacciotti on 6 August 2011 and has welcomed her first child, a baby girl in 2016.

The couple dated for several years before getting hitched on 6 August 2011. They had a small wedding ceremony where only a few of their close friends and family members were invited.

However, the registration card of the couple’s wedding was revealed which provided the information to all of us that they tied the knot on 2011.

Well, as long as they are happy together it does not matter whether they shared their news with the media or not and it seems like they are very much happy together.

Currently, they must be enjoying their life even more as they have just welcomed their first child a beautiful baby girl into their world.

The couple welcomed their first child

#babyshower for the #babydaddy. Thank you, Mo aka "Maid of Honor" @mohamedhussain

On 30 January 2016, the soon to be mother shared the picture through her Instagram where she was celebrating the baby shower and revealed to the world that she was expecting.

You May Like: CNN Reporter Lisa Ling is happily Married. See her journey as a Wife and a Reporter

Finally, on 30 March 2016, the duo welcomed the beautiful baby girl as the new member of their happy and sweet family.

They must very happy right now as a child always completes the family and gives you the biggest happiness of your life.

She started her career as a reporter and a staff writer for Forbes Media where was assigned to report for ForbesLife Magazine, Forbes Magazine, and Forbes .com.

She joined the network in 2009 holding several positions and covering a wide range of stories.

In her career, she has managed to interview several billionaires, thought leaders, head of state and so on.

Similarly, Brennan also worked as an intern at Newsweek International, where she worked as a contributing writer and fact-checker.

Currently, she is working as a general assignment reporter for CNBC, based at Englewood Cliffs, N.J. She joined the channel in 2013.

.@elonmusk on @SpaceX Falcon explosion: problem thats "never been encountered before in history of rocketry"; looking to Dec for next launch

Apart from being a husband of a celebrity, Matt has always preferred to stay from the limelight. He is a very simple person.

As per his Facebook account, he is a self-employed man and has also worked for the New York Mercantile Exchange.

Currently, he has his business and is the president and owner of MMC Trading and Gold Street Ltd.

Also Read: CNBC Journalist Julia Boorstin married to film producer Couper Samuelson in 2007. Do they have any children?

Not only a good businessman but he also seems to be a great husband and his wife Morgan never forget to praise her husband through her media accounts.

We can assume that he is also a very good father and we would also like to wish both the couple to have a very healthy and happy family life ahead.