Home Article CNBC Journalist Julia Boorstin married to film producer Couper Samuelson in 2007. Do they have any children?

CNBC Journalist Julia Boorstin married to film producer Couper Samuelson in 2007. Do they have any children? 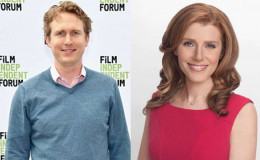 CNBC Journalist Julia Boorstin married Couper Samuelson in 2007 and has been living a fairytale life since then.

The couple seems very much happy together and they have also been blessed with a child named Henry.

Couper and Julia first met at the Sundance film Festival. He was at one of those events at Sundance in the year 2004 when one of his friends dragged him over to meet Julia.

“A phalanx of boring people in parkas parted, and there was this dramatic-looking woman wearing this dark leather shearling coat.”

“She was extremely attractive so I decided to play it cool.” Julia was also impressed by him, she said, “He’s 6-6 and cute. How could you miss him?”

After the first meeting, there was no doubt that both of them were extremely attracted to each other which is why after several meetings Julia invited him to have dinner.

Couper also planned to impress her at that dinner date which included an invitation to see Macy Gray perform at a club.

While they were at the club listening songs, Couper just kissed her even though both of them could not figure out what the kiss really meant it was very special for both of them and the couple officially started dating each other.

In 2005, Samuelson went to New York for his work and they were at the long distance relationship for several months.

During that time the couple went for the vacation to Paris. While describing that vacation Julia said, “Couper made the most amazing declaration of love I’d ever heard in any movie or anything. And I thought this long-distance relationship is worth fighting for.”

Both of them trusted and loved each other unconditionally which might be the reason that long distance also did not come in their way but it made their relationship even stronger.

After Paris, their next trip was at Morocco where Couper had a plan to propose Julia and also to create a videotape which is why he handed the video camera to a street vendor with a pet monkey.

He said, “So there I am on my knees, addressing the guy, saying, ‘I want to spend the rest of my life with you, will you marry me? Unfortunately, he’d put his money on my head.” Funny and sweet at the same time, isn’t it?

Then he decided to show the video to Julia and when they returned to Los Angeles Couper parked his car in a turnout on Mulholland Drive and showed the video to his future wife where he was proposing her with a monkey on his head.

While describing that moment Couper said, “In my car, I dropped to half-knee, got the ring from the glove compartment, and said, ‘Will you marry me?’” In a reply, Julia said yes and promised him to be with him forever.

After dating for about two years on 16 December 2007, the beautiful couple got hitched at Il Cielo, a restaurant in Beverly Hills, Calif in front of one hundred and thirteen guests.

The pair was extremely happy on their wedding day and first time as a husband and wife they danced on the song, ‘People Will Say We’re in Love.”

It does not need any more special requirements to make your marriage successful. It only needs two people who trust and love each other without any expectation and Julia and Couper are those couples who are very special not for others but for each other.

Currently, they are living a happy married life and also living a wonderful and successful professional life.

Similarly, the couple is blessed with a son named Henry. They welcomed their child in 2011 and this family happy currently resides in Los Angeles.