Home Article Dan Abrams and his girlfriend Florinka Pesenti are living happily with their son. Are they getting married?

Dan Abrams and his girlfriend Florinka Pesenti are living happily with their son. Are they getting married? 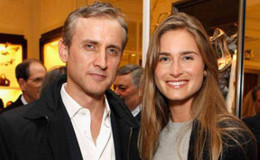 Dan Abrams is an American news host and the chief legal affairs anchor for ABC News as the host of 60 Days In and Live PD on the A&E cable network.

Dan is currently in a relationship with Florinka Pesenti, and they have a child together. The couple is now together for more than five years. Are they thinking of getting married? Let us find out more about them.

Dan and Florinka's love story started back in the year 2009, at a party to celebrate The Hunger a memoir by John DeLucie, a mutual friend introduced Dan and Florinka.

However, when Florinka told Dan that we have met each other few times before Dan didn't recognize her. He said:

“We had met a few times before, which Dan claims didn’t happen, but he meets a lot more people than I do, and he was famous.”

At that time Florinka was recently out of a longterm relationship, and she was not looking for a new one just yet, but as soon as she saw Dan, she was attracted towards him. Well, we cannot blame her!!!! Right girls!!!!!

But at that time they both were dating other people, and Dan wasn't looking for any relationship as he was too busy with his work.

"One of the most amazing feelings in the world is having someone fall in love with you who you thought you never had a chance with." Same happened with Dan and Florinka; both of them thought they would not fall for each other but destiny had something else planned for them.

The pair eventually started dating from the year 2010.

Dan Abrams and his girlfriend Florinka Pesenti are living happily with their son. Are they getting married?

Dan has never been in any serious relationship before, but he has dated a few people in his past. He dated the celebrities like Elisabeth Rohm, Jamie Murray, and Renee Zellweger before being in a relationship with Florinka.

Dan currently resides in New York with his girlfriend and a son. The couple was overwhelmed by happiness after their son was born.

They named him after Dan's father, Everett Floyd Abrams. Everett was born in January 2012.

Dan said that in their apartment there was a room where children were not allowed, but now their son runs and plays all over the apartment.

A child can bend any rules even if his/her parents are strict. Sometimes Everett's grandfather Floyd Abrams babysits him whenever the couple is outside.

Pesenti is the Director of Public Relations for Gucci. She is also famous for winning the "The Amazing Race" as she was the first female ever to do so.

Announcement of having a baby

After dating for about two years in January 2012, the couple announced that they are having a baby.

"Florinka and I are really excited about this. I have been looking forward to having a child for many years."

Their son, Everett is now 4-year-old now, and the couple is living the blessed life as they are getting to see a life evolving in front of them.

We truly wish them all the best and pray that their family always remain together.