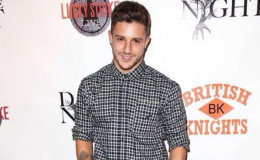 The very talented American dancer, choreographer, and an actor gained popularity, especially among young girls after his role as Eddy.

Misha has been grabbing a lot of attention. His good looks and dancing skills could leave just about anyone awestruck.

No wonder there are thousands of ladies drooling over him, wanting to know if he is single or taken and if taken, taken by whom.

Misha Gabriel’s Girlfriends; Is He Dating Someone?

Misha never officially came forward about any of his girlfriends. He probably wants his private life to remain private, or perhaps he did not think it was important for us to know about his love life.

Maybe his dating life is not such a big mystery after all. Though he has not made any official statements about his relationship he has been making posts about his girlfriend on Instagram.

Misha has made several posts on his Instagram and Twitter account where he was seen romantically posing pictures with Lindsay Leuschner. By the looks of her profile, Lindsay also looks like a dancer or a model.

Similarly, he once made a post on Instagram on Lindsay’s birthday mentioning how lucky he feels to have her in his life and how much he loves her.

Likewise, he also said that he was very thankful for the memories they have made together and that he cannot wait to create more memories.

This post was made 35 weeks ago. The whereabouts of the relationship are unknown. Is he still in a relationship with Lindsay or did this post mean a completely different thing?

Misha has also previously tweeted about spending a happy life with his girlfriend. Except, this time, it was a completely different user tagged in the post.

You May Like: Ballroom Dancer Kym Johnson is married to businessman husband Robert Herjavec since 2016. See their relationship.

The user ID was @Alexathing and the username was Alexa Anderson. The tweet was made 6 years ago so the relationship has probably already ended.

Misha Gabriel is a very active user of the social networking sites. He has been regularly updating his Instagram and Twitter profile.

It is very clear that Misha ships his parents very much and considers his mother his idol.

Misha seems to be very close with his family, constantly post pictures of his parents and sister and never forgets to mention how much he loves them.

According to Misha’s Instagram posts, he considers his parents' relationship goals and is very proud of them for having such a strong bond.

Maybe he also wants to have a relationship just like his parents have and we would like to wish him to meet his soulmate as soon as possible.