Home Article Does The American YouTube Personality iDubbbz Have A Girlfriend? Details Of His Affairs And Dating Rumors

Does The American YouTube Personality iDubbbz Have A Girlfriend? Details Of His Affairs And Dating Rumors 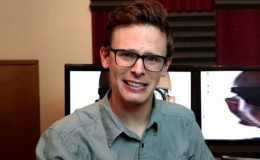 YouTube has been a revolutionary game-changing idea in the area of entertainment as it has given any common man the ability and an opportunity to become a celebrity. The rise of the digital stage has given birth to millions of stars who have millions of fans.

Among the internet celebrities is Ian Carter, also known as iDubbbz who is a YouTube sensation and a star but his experiences have shown that although the entertainment platform has changed, some things still remain the same.

iDubbbz and Anisa Jomha Still Together!

iDubbbz, the 29-year-old YouTuber is still in a lovey-dovey relationship with girlfriend Alisa Jomha. Even though the comedian hesitates to share his dating history to the public, his partner never misses flaunting their chemistry.

Alisa took a cute picture of the cupid informing that they went on a mossy and wet hike on December 19, 2019. Similarly, on 9 October of the same year, the blonde beauty and her beau celebrated three years of kissing on the lips. She is close to IDubbbz's friends and family too.

Assuming her strong bond with Ian, they will take the relationship very far and will soon walk down the aisle. In the meantime, the YouTuber and his lover prefer to hike the Rockies and witness wildlife too as the both are nature lovers.

YouTube Personality iDubbbz Present Affairs; Is He Dating a Girlfriend?

Seeing some of Carter’s videos, one is left to wonder whether a girl can put up with the YouTubers shenanigans but apparently, there’s someone who has agreed to and is currently dealing with everything that comes with being a YouTube sensation. And the name of the one bearing through it is Anisa Jomha.

Jomha and iDubbbz, 28, seem to be in love and are shy about showing the world how crazy they are for each other. Like Carter, who is a well-known YouTuber, Anisa is also an internet queen who’s a bit of a star in her own way.

Anisa and iDubbbz dating timeline is actually a pretty nice story like a movie. As revealed in an AMA video that she made, Anisa’s relationship with iDubbbz begun through her boredom.

Also Read: 23 Years YouTuber Gibi ASMR Dating A Boyfriend Or Yet To Find Her Partner

She recently attended Twitch Con and booked an extra day in San Diego. While sitting alone in the hotel as everyone else had left the day before, she was scrolling through Twitter when she noticed that iDubbbz was just tweeting away nonstop.

Anisa tweeted back at him, basically asking iDubbbz to save her from her boredom and to her surprise, iDubbbz picked her up from the hotel and they went for tacos and ended up talking for hours.

Had a great last day in California and we even won a fraggle rock boy at the arcade! I’m always sad leaving San Diego but I’m excited to see my family! Very bittersweet

This later turned into long conversations when she got back home to Canada. Their love continued to flourish and as she was not ready to allow iDubbbz to slip from her hands.

Had a really great time celebrating our friends birthday yesterday! We won a bunch of arcade tickets and played a lot of mini golf! We even ended up winning a jackpot

Furthermore, she relocated to California from Alberta Canada, to be closer to the YouTuber.

iDubbbz Past Affairs And Rumors

Like most celebrities, there has been rumors and speculations about Ian too. Although there are no details about his past affairs, he was rumored to be gay after a video titled “Edward Watermelon-Hands” was uploaded by MaxMoeFoe on May 19th, 2016.

Must read: Youtuber Lilly Singh dating someone or still single

In the video, he requested iDubbbz to jump down from the table and asked him to say ''some gay shit.'' Immediately after that Ian jumped down saying “I’m gay.''

iDubbbz with Filthy Frank and Maxmoefoe
SOURCE: Know Your Meme

It made people wonder if it was Ian's way of coming out, or if it was just a joke and the spark then lighted the fire with numerous new questioning.

The world and his fans took his words under serious consideration to the point that the video garnered over 1.1 million views only after a couple of months.

Ian's video may have gained online popularity but the truth remains that the YouTube sensation is not gay. In fact, other than the video he never gave his fans any impression to question about his sexuality.

Later sometime in January 2017, the internet was again flooded with questions about Carter’s welfare and his state of existence as various news emerged that the YouTuber was found dead in his home.

But on the contrary, iDubbbz is still alive and doing well in his career and we wish him the best to continue his work.