After three divorces and several unsuccessful relationships, the 'Santa Clarita Diet' actress Drew Barrymore is thinking of not dating anyone anytime sooner 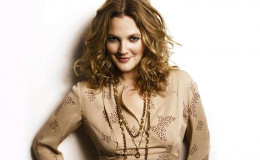 Drew Barrymore got divorced for the third time now and she is currently single and is dating anyone: No boyfriend: The mother of two children; daughters is focused on her career.

After her divorce with Will Kopelman in August 2016, Drew Barrymore got cast in the Netflix's Comedy series Santa Clarita Diet.

It was a much-needed break for her as it really helped recover from her sad divorce last year. This was the third time she got divorced and it was truly a heartbreaking blow for her.

She is raising her daughters and being a mom has changed her perspective. Let us find out what is Drew up to these days and find out more about her personal life.

Drew has been a star since she was 6-years-old and there is no doubt she is one of the most famous Hollywood stars in the globe.

She debuted as one of the main characters in the 1982 blockbuster sci-fi E.T. the Extra-Terrestrial which was directed by her godfather Steven Spielberg. 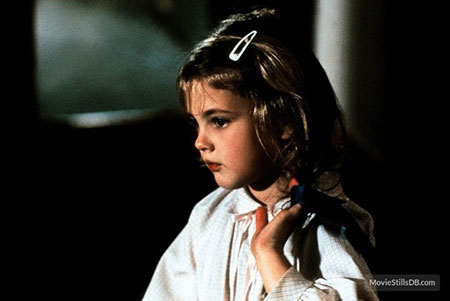 After the huge success of the movie, Drew got roles in various movies like Batman Forever, Guncrazy, and Ever After; A Cinderella Story. It was the beginning of the immense fame.

The 42-year-old actress has been married and divorced three times and we cannot imagine how much pain does one go after a separation.

In 1989, Barrymore started dating Corey Feldman for a brief amount of time and the couple took their relationship to the public eye at the Motion Picture Ball. 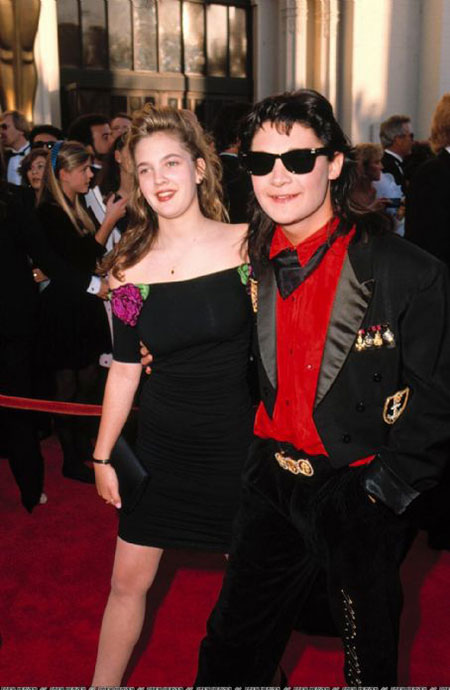 Drew and Corey in a movie Premier, Source: Whos Dated Who

From 1990 to 1993, she dated many of her co-stars like Balthazar Getty, David Arquette, and Jamie Walters.

Drew was also engaged to Jamie Walters in 1993 but called it off later as things were not working out. 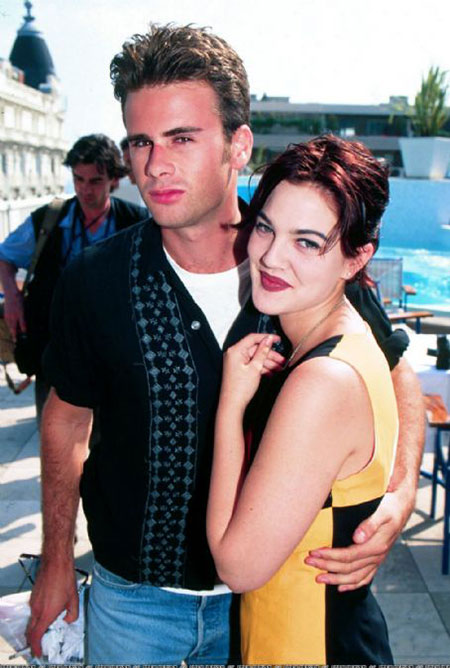 She also dated Edward Norton in 1996 and Luke Wilson in 1999. Off all the short term relationship that she had, her relationship with Fabrizio Moretti was the longest. 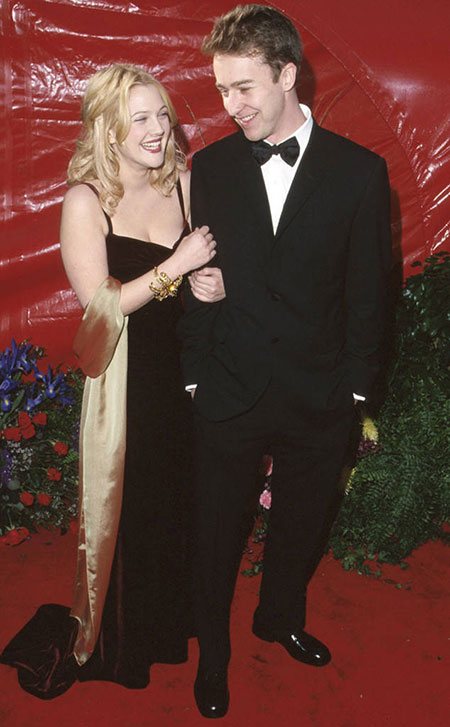 Drew and Edward Norton at the Oscars, Source: E online

They started dating in 2002 and their relationship ended in 2007. Drew herself admitted about the duration of her relationship and in an interview to the Harper's Bazar she stated,

"The longest I've ever been with someone was like two to three years, so I'm in uncharted waters, right now I'm more into championing him as a human being than gushing love for him."

After her break-up with him, she started an affair with American actor Justin Long in 2007. They rekindled their love with each other two times as they break-up in 2008 but then patched it up again in 2009. 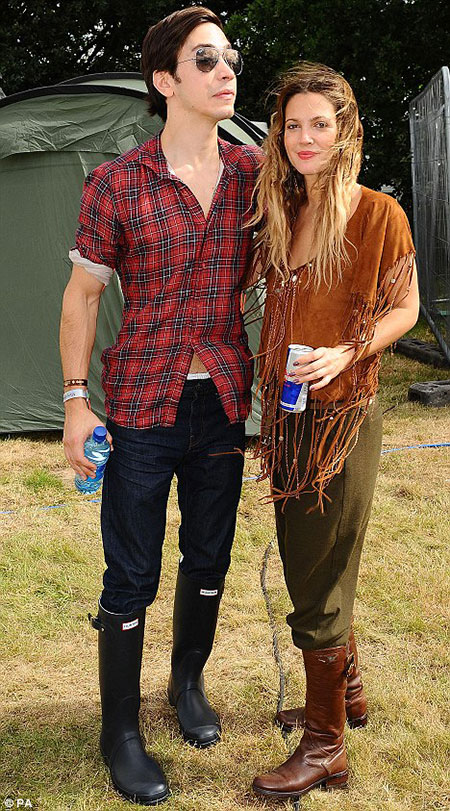 In 1994 she was in a relationship with bar owner Jeremy Thomas and the couple got married on 20th March 1994.

Drew was a mere 19-year-old when she took this big decision and it didn't work out for her as the couple got separated after just 2 months of marriage. 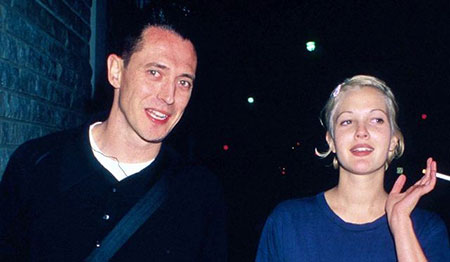 Her second marriage was with Tom Green a comedian in 1999. They first started dating in the late 1990s and their marriage was very unexpected to many people out there. 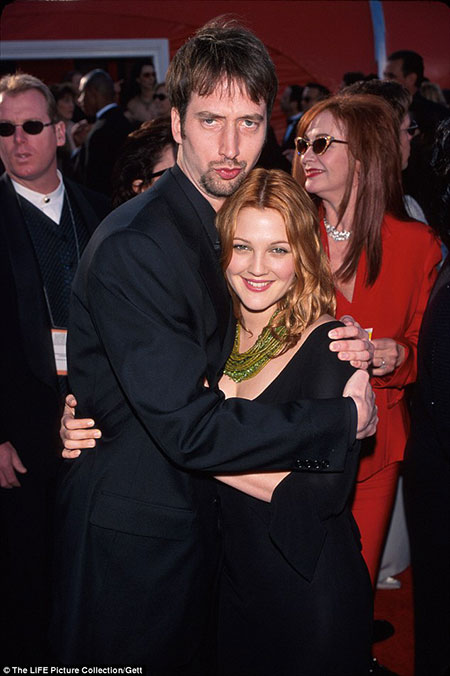 “I want our kids to have someone to roll their eyes with when Mom and Dad are being totally lame and goofy,”

But it seems that they didn't get any chance to raise children as they divorced after three years of marriage. They filed for a divorce in 2001, and after the divorce, Tom released his statement stating,

“Drew is a wonderful woman. I love her very much. I wish our marriage could have worked out. I wish her much happiness.”

After the heartbreaking divorce two times in a row, Drew was not ready for any commitment anytime soon.

After years of short-term flings, she tied the knot with her boyfriend Will Kopelman on 2nd June 2012. 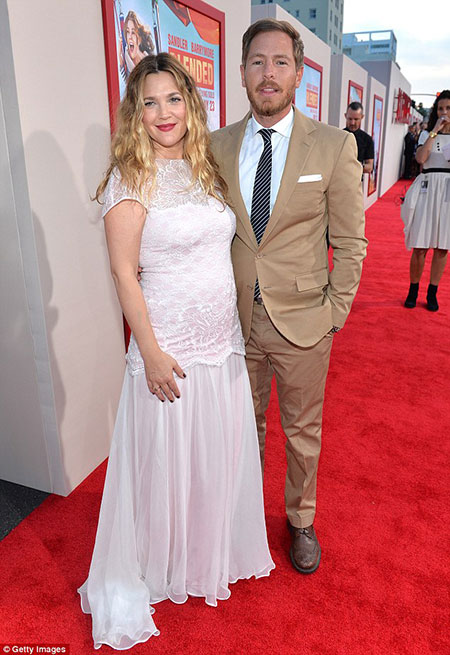 Drew and Will welcomed two angelic daughters and the family of four was the prime example of short and happy family. 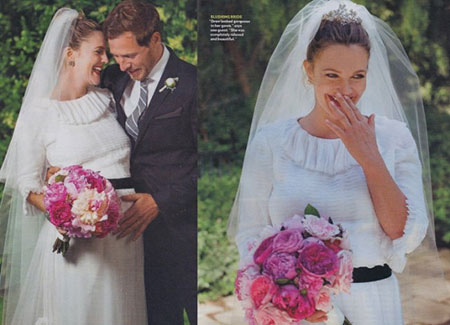 But due to some irreconcilable differences, the couple filed for a divorce and their divorce was finalized in 3rd August 2016.

Even though the couple has now been separated but they still remain good friends just for the sake of their two daughters.

After the divorce, the couple was granted mutual custody of their daughter.

Well, it's high time for Drew as she is working in various TV series right now and taking care of her daughter.

We wish that she becomes the best mother in the whole world.