Home Article Elliot DeGeneres, Father of Ellen DeGeneres Sadly Passed Away At 92: "He Was Always Proud Of Me."

Elliot DeGeneres, Father of Ellen DeGeneres Sadly Passed Away At 92: "He Was Always Proud Of Me." 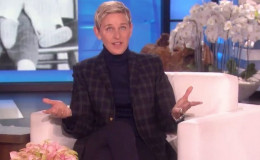 Ellen DeGeneres's father, Elliot DeGeneres Died At The Age of 92. Ellen was very close to her father and brother, happy family.

Elliot sadly passed away at the age of 92 and the Ellen DeGeneres Show host announced the unfortunate news on her show on Thursday, expressing all the gratitude and love she has for her late father.

Elliot DeGeneres, Father of Ellen DeGeneres Sadly Passed Away At 92: "He Was Always Proud Of Me."

The second week of 2018 has turned out to be more of a nightmare for Ellen. With the horrifying mudslide striking in her residential area in Montecito and the death of her beloved father have taken a toll on the famous television host.

The 59-year-old host revealed the sad news to her audiences live on Thursday stating that her father, a former insurance salesman is no more. 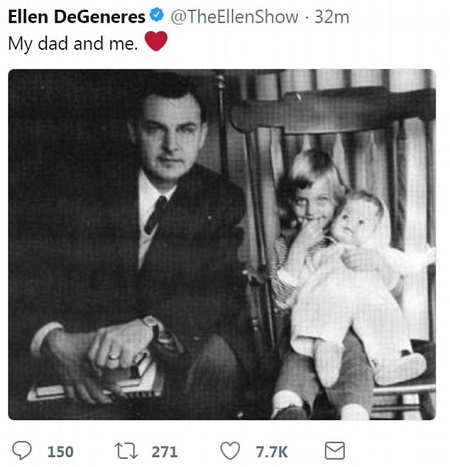 Ellen with her dad, a rare picture
Source: Twitter

She shared  a picture of her with her dad when she was little and went on saying,

"That is my dad, Elliot. That’s me when I was, I don’t know how old I was, but I do remember that picture,"

She also shared how her father was always proud of her, telling he was a very kind man and there was not one bone of judgment in his body.

This week, at the age of 92, my father Elliott DeGeneres passed away. He lived a good long life. It wasn’t unexpected. I was able to say goodbye. pic.twitter.com/L0zEJJNPrq

Ellen who's happily married to her partner Portia de Rossi also added she and her father had once visited a Warner Bros. lot when she was a little girl and now, she has her own lot, which always made him proud.

When I was a kid, my dad took us on one vacation to Warner Bros. Studios. He loved this business. He loved that I was in it. When he died, I saw this rainbow over the stage they named for me. pic.twitter.com/QQswe3mwfi

Also, just 10 minutes before the death of her father, Ellen saw a rainbow shining in the sky just above her Warner Bros. lot which she considered as a gift from her dad. It was an emotional moment for Ellen! May his soul rest in peace.