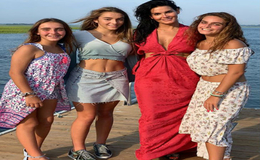 Emery Hope Sehorn is the one who brings joy on actress Angie Harmon's face. Emery is the apple of Angie's eyes. Emery is hope, love, and everything to Angie.

In December 2020, Emery Hope Sehorn will turn 12. In other news, that also means, it will mark twelve years since she brought immense happiness to her family, especially her mother, Angie Harmon, and father, Jason Sehorn.

And, being born to some of the famous people in Hollywood, Emery has been stealing the limelight from a very young age. Needless to say, she is often spotted in public events with her actress mother, and sisters.

Well, Emery isn't the only child of her parents, as she is the youngest one who has two elder sisters including Avery Grace Sehorn and Finley Faith Sehorn. She is also very close to her siblings and loves them dearly.

Emery who celebrates her birthday on 18th December, however, maintains a low profile because of her parents' stardom aside from seldom making public appearances. For instance, Emery alongside her sisters presented her mother with the UNICEF Ambassador Honoree Award in 2017.

Everything is perfect in Emery Hope Sehorn's life except the fact that her parents are divorced. That, however, doesn't mean her parents' separation made Emery and her sisters' life miserable.

Emery's parents, Angie Harmon and Jason Sehorn remained married for almost thirteen years before they split in 2013. The duo only divorced in 2015. Emery's father proposed Angie during her appearance on The Tonight Show with Jay Leno in 2000 before their wedding in 2001.

Although Emery's parents are no longer together, the duo shares the custody of their children equally and co-parents them together. Emery has a step-mother too, from her father's third marriage to Meghann Gunderman.

As for Emery's mother, she is currently engaged to boyfriend fellow actor Greg Vaughan. And, by the looks of Emery's mother Instagram, Emery and her sisters share a close bonding with Vaughan.

See more Gossip and News only on Married Wiki.