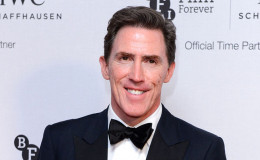 Welsh actor and comedian Rob Brydon explained in 2017 that he lost excitement about marriage when his split with his first wife. Brydon who remained quiet about his divorce for about 16 years finally opened his pain he felt after he separated from his first wife Martina Fitchie in 2001.

The father-of-five is happily married to his second wife Claire Holland and they have been living a perfect life together. Let's know all the details about his family life, children and many more!

Rob Brydon married his second wife Clare Holland on 6 October 2006. Being completely broken from his divorce, his wife, Clare loved him and cared for him so that he could forget every pain he faced in the past.

The lovebirds first met at the South Bank Awards in 2002. After some years of dating, the couple finally chose one another for their entire life as they exchanged vows at Windsor church.

The pair welcomed their first child, Tom Jones in April 2008 and the second one, George Jones in June 2011. The family of four currently reside a happy and prosperous life in Strawberry Hill in the London Borough of Richmond upon the Thames.

As an obvious fact, Brydon is protective of his family life. We wish him all the very best for his future wellbeing.

Comedian Rob Brydon finally revealed about his grief after he lost his first marriage. He met his first wife Martina Fitchie in a pub in Cardiff while Brydon was working at Radio Wales. Martina's sister also worked at Radio Wales as a producer.

The couple who has three kids, Katie Jones (1994), Amy Jones (1998), and a son Harry Jones (1996) divorced in 2001. He often refused to talk about his divorce in interviews and he left the entire topic from his autobiography.

He finally spilled the beans during an interview in March 2017, 16 years after the divorce. He said,

'You lose excitement with marriage. You can't have everything though.'

"I remember not wanting children, and I remember a different feeling coming over me."

'I'd love to know what could be more traumatic than that.'

'It doesn't change what it was. You learn to live with it, but you don't say, 'I broke my leg on the ski slope, and while I was waiting for them to come, it wasn't the most painful thing.' The pain is still the same.'

Though he felt so broken at first now, everything is settled down and he's living a blessed life with his new love.