Skip Bayless is an American sports columnist and television personality known as a commentator on the ESPN2 show First Take alongside Stephen A. Smith until April 2016. Currently, he hosts an American sports talk show Skip and Shannon: Undisputed with Shannon Sharpe and Joy Taylor.

He married Ernestine Sclafani; currently working as the vice president of Weber Shandwick Public Relations in New York. The couple is together for over a decade now. How is their relationship going on? Any divorce rumors? What about their children? We have all the details here!!!!!!

Skip, and Ernestine after dating for a while got married in a small ceremony several years back, and they are almost inseparable since then. The couple is very happy in their relationship, and we have not heard any divorce rumors between them.

Bayless met his current wife while working in the SSPN sports program Cold Pizza when she brought actor Kevin Dillon to the set.  They built an instant connection and had dinner together the same night. They both met, fell in love and you might be aware of the rest of the story.

The couple does not have any children yet. Maybe both of them are busy in their respective career, and they are yet not ready to bear the responsibility of parenthood.

You May Also like; Catherine Herridge husband and her married life

They don't prefer much public appearance also don't reveal much about their personal life. Ernestine once describe her husband saying;

Some sources close to Skip said,

"Ernestine is the only one who handled him throughout his life. Skip and Ernestine have shared many memorable moments as girlfriend and boyfriend and at the start of their relationship."

Skip also misses no chance to embrace his darling wife with all the possible words. He once talked about his wife saying,

"She’s the strongest-willed and can elbow her way into my life better than the others."

Skip Bayless: His Past Affairs And Relationships

Ernestine is not the first lady love of the TV personality. Skip was previously married to his college girlfriend. Though the identity of the lady is still a mystery, they remained an item for many years till an unfortunate break.

Sources also say that Bayless had four other long-term relationships; most probably all ended for one common reason-his dedication to his work.

Meanwhile, it's all past, and as of now, he is a happily married man. 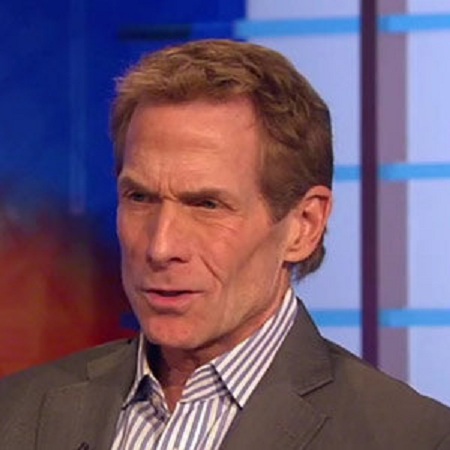