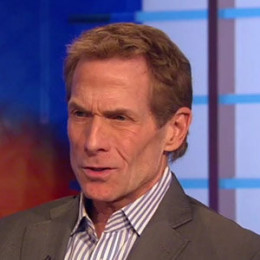 John Edward “Skip” Bayless is an American sports columnist, author, and television personality. He is well known for his work as a commentator on the ESON2 show, First Take, with Stephen A. Smith, a show which he left in April of 2016. Skip is the eldest of the three children, has a brother and sister. Skip’s parents were in the restaurant business. He came to media attention post his appearance on TV was in 1989 where he was on the panel of an ESPN show called The Sports Reporter.

Skip Bayles is married to a publicist, Ernestine Sclafani since 2016. The anchor and his girlfriend turned spouse first met on the set of ESPN’s show ‘Cold Pizza’. Ernestine is a private person therefore for the first few years, it was thought that her existence is a rumor.

But even after all those non-existing rumors, Skip didn’t comment on his wife. This marriage isn’t the only marriage of Skip. He was married to his high school girlfriend which ended in divorce.

Now that Skip and Ernestine are together and are living happily for nearly four years now, there are no rumors or news about their extramarital affairs or divorce or children.

Skip Bayles, a renowned American media personality holds an estimated net worth of about $13 million as of 2020. He receives an annual salary of $5 million as a sports commentator from FOX Sports.

In 2016, FOX provided him a $4 million signing bonus and paid him $5.5 million a year for the next four years. FOX tried to hire Bayles, while he decided to quit ESPN at the end of August 2016 though his dedication and skills have benefitted ESPN for twelve years.

Most of the people are probably unaware that Skip Bayles is an award-winning journalist. The brown-haired is widely acclaimed for his work on First Take, a debate-based show, he's done with Stephen A. Smith. It was the highest-rated program on ESPN2.

The 68-year-old drove rapper Lil Wayne's lavish Black Lamborghini at South Beach Hotel. On January 31, 2020, the sports commentator had undisputed live from LOOMIS PARK saying he wants to borrow it for Super Bowl Week. It made him feel like the streets were paved with gold.

Surprisingly enough, the "No Mercy" singer gifted Skip Bayless a golden necklace designed with diamond locket written "SKIP" with an honor. Wayne thanked him for that and said he will wear it on Undisputed the next day.

DAZN announces they are moving beyond live boxing matches and sports events to launch more original studio shows and documentaries. While Skip's partner Stephen made no secret of his wish to reunited the former "First Take" duo, news reporter McCarthy doubts whether ESPN President Jimmy Pitaro wants to pay Bayless in Smith's $8 million per annum range.

And, the further step for the streaming service could be debate shows, ala Skip Bayless'"Undisputed" on FS1 and Stephen A. Smith's First Take on ESPN. Skip Bayles' deal expired in September, setting up a possible reunion with ex-ESPN bosses.

Bayles, four-year $25 million-contracts at Fox SPorts would be expiring in September 2020, DAZN and Jamie Horowitz have emerged as a potential bidder for the upcoming TV free agent.

Skip Bayles was born as John Edward Bayless II on 4 December 1951 in Oklahoma City, Oklahoma. He earned graduation from Vanderbilt University and started working as a columnist at The Miami Herald for two years subsequently after finishing higher education.

Today, He is renowned as the commentator on the ESPN2 show, First Take with Stephen A. Smith. He left the show in 2016 and the same year he joined Shannon Sharpe on Skip and Shannon: Undisputed on Fox Sports 1.

Skip Bayles is married to the love of his life, Ernestine Sclafani from 2016 to 2020. They are together for nearly four years now.