Age is just a number for Faith Majors and his husband, a veteran famous actor Lee Majors who married four times. And, true to Lee's words, it is indeed a record in Hollywood considering that the couple is still going stronger to date even after more than two decades years.

As a matter of fact, Faith Majors and her husband, Lee Majors has been married since 2002 and to date, no speculations or hints of separation and extramarital affairs of the pair are talked about in the public. Perhaps, the love birds are still head over hills in love with each other just like they were more than twenty-five years ago.

Faith Majors Was only 21 When She First Met Lee

Since you're here, curiosities must have filled your mind to find out how the couple was able to meet and how the two with so much age gap were able to fall in love. Well, the love story of Mr. and Mrs. Faith dates back to more than twenty-five years ago in the year 1995.

All thanks to their fate that united them at a dinner party hosted by a mutual friend in Florida. And, that was it, as the recently divorced actor who split from his third wife, Karen Velez in the previous year (1994) first met his then-future wife, he was star struck.

Funnily, Majors who was fifty-six at the time suddenly became nervous and scared to approach the gorgeous woman sitting right in front of him at the event. Maybe he was afraid he would have to face a rejection considering that he was too old for Faith who was only 21 back then.

So, instead, Lee asked his friend for a favor to ask for her number. Of course, Faith was surprised yet excited that she was asked out by a mega movie star. And, not long after that, the two sat together at their first-ever date at a Super Bowl game.

Faith & Lee Marries Amidst All The Age Gap Controversies

Whilst the public thought Lee's relationship with much younger Faith wouldn't last just like his previous ones, the love birds were still going stronger. And, in 2002, after seven years of dating as a girlfriend and boyfriend, Faith and Lee took the next serious step of their relationship and legally exchanged their marital vows.

On the other side, their whopping age gap of thirty-five years caused a lot of criticism and made headlines too. But, it meant nothing to the Faith who couldn't be eager to spend the rest of her life together and change her surname from Cross to Majors.

And, today, Faith and the Six Million Dollar star have happily traveled across the world and lived in different places of the US from California to Houston. Not to mention, through connections from his husband, Faith even tried out in the acting film and performed on National Lampoon's TV: The Movie.

Faith Is A Stepmother To Four Children Older Than Her

Throughout the twenty years of their marriage, Faith never bore a child or became a mother and it seems as Faith and Lee were completely fine with being childless as they couldn't be bothered to start a family of their own. 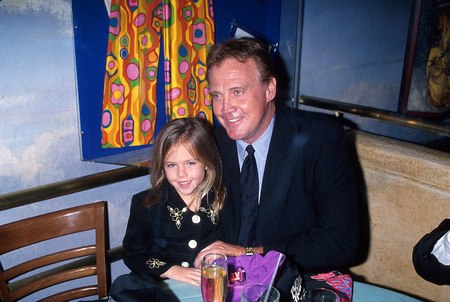 On the other hand, Faith's husband who was already married thrice shared four children with his former wives. His oldest son, Lee Majors II, who is twelve years older than Faith, was born through the actor's first marriage with Kathy Robinson which lived for only four years.

Lee, likewise, bore no children with his second wife, Farrah Fawcett who died in 2009 after a brief battle with cancer. The Keaton's Cop actor shares all remaining three children including a daughter named Nikki Majors(1988) and twin son: Trey Kulley Majors and Dane Luke Majors (1992) with his third wife, Karen Velez.