Home Article Football Coach Nick Saban Has Two Special Gifts, a Son and a Daughter After His Marriage With Terry Saban

Football Coach Nick Saban Has Two Special Gifts, a Son and a Daughter After His Marriage With Terry Saban 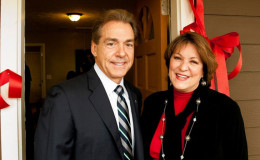 Find about the Alabama head football coach Nick Saban married life. Know about the two special godly gifts to him. Moreover, his rise in career from scratch.

The Miami Dolphin's ex-head coach Nick Saban often kept his admirers wondering. Not only the iconic coach speaks through his success on the pitch, but also his grasping personal life fills enthusiasm amongst his fans.

Nick Saban is a popular American football coach who serves as the football coach at the University of Alabama, since 2007. Just as the elegance in his professional career, the coach managed to keep his personal life very smooth with his wife and kids. Know more about the Football Coach Nick Saban married relationship and rise in his career!

Nick is a married man, who first met the love of his life Terry Constable, in seventh grade at a 4-H science camp. Later, the lovebirds started dating. At that time, Nick was studying at Kent State and Terry was teaching in West Virginia.

Daddy and the daughter dance!

Kristen walked down the aisle with her childhood love, Adam Setas. His son, Nicholas married Kelse Laney and shares a daughter, Amelie Saban in 2013.

As of 2019, Nick Saban marital status with Terry Constable crosses forty-eight years. The pair is not the part of any controversy and rumor till now.

Moreover, the family is living happily and still going on a perfect relationship.

Nick Saban's Career and Net Worth

From a career of the head coach, Nick Saban made fortune during his watch. As of now, the professional coach's estimated net worth is about $45 million and earns $11.5 million annually.

Moving back, Nick started his career as a head coach of the University of Toledo on December 22, 1989. Yet, his success reached at a height after Nick Saban came off of 6-5 seasons in 1988 and 1989 with The Rockets.

Later, Nick resigned from Toledo and coordinated the Cleveland Browns. Moreover, prior to Michigan, he arrived at East Lansing in 1995.

I need this in shot form so I can inject this into my veins...
pic.twitter.com/xd5Kefcb3E

Moreover, he took Spartans to bowl games followingly naming him as the LSU 31st head coach in November 1999. Also, Saban hard work made a 10-3 record for LSU in 2001 bagging the SEC Championship.

You May Read: Is American Football Coach Sean Mcvay Dating A Girlfriend Or Secretly Married And Living With His Wife?

On December 25, 2004, Nick designated on the role of head coaching position for the Miami Dolphins. Similarly, he met the officials of Alabama to pursue his career on January 1, 2007. 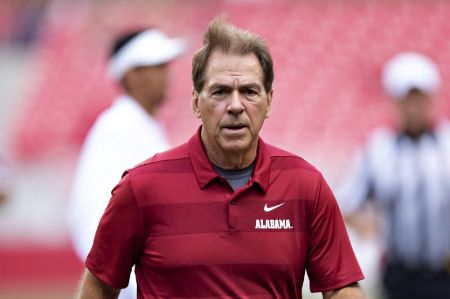