Home Article American Football Coach Bret Bielema and wife Jennifer Hielsberg are expecting their first child: The new to be parents shared the news via Twitter

American Football Coach Bret Bielema and wife Jennifer Hielsberg are expecting their first child: The new to be parents shared the news via Twitter 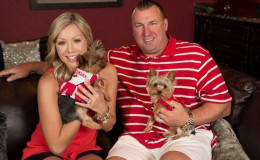 Bret Bielema is one of the renowned personality in the football world who was most recently the head football coach at the University of Arkansas ending with a 29-34 record.

Professionally he is very successful and if we talk about his personal life he is a happy man. Bret is married to 'Jennifer Hielsberg' and the duo are expecting their first child.

If you truly love someone then age is just a number and this thing never affects your relationship, Bret and Jennifer are one of the best examples of it.

Bielema and Jen first met at the Wynn Casino in La Vegas where both of them were present for the fundraiser program. Bret loved to call his love a first sight love because he fell for Jennifer in the first encounter. How romantic isn't it?

If we believe in source than Jen didn't know about Bret's profession (Football Coach) until about four months after they met.

On March 2011, Bielema proposed Jen on a cruise at a private dinner where he got down on his knee and told her,

"I want to live my rest of life with you always and forever."

After proposing her, he turned off his phone for nearly one week because he wanted to spend all of his precious time with his new fiance.

Just after a year of engagement, on March 1, 2012, the duo exchanged a vow. According to the source, their wedding was a private affair where only close friends and family members were invited.

According to the source, their wedding was a private affair where only close friends and family members were invited.

The couple is together for four years and in between, we have never heard any bad rumors regarding their married life which proves Bret and Jen have so much love for one another.

In 2013, when Jen shared her bikini picture on Instagram this news just heat up the media at that time.

It was said that children add the more beautiful color in a couple's life and being parents is the best feeling in the world; soon Bret and Jen also going to experienced those feelings.

Discover; Is American Football Coach Sean Mcvay Dating A Girlfriend Or Secretly Married And Living With His Wife?

Yes, you heard it right, Bret and his wife were expecting their first baby and this news was officially announced by Jen herself in December 2016 via her Twitter account.

Though sex of the baby has not been revealed it does not matter whether it is a boy or a baby girl. What say, guys??

Bret stated that they would be expecting the baby to arrive around July 2017, possibly during the 2017 SEC Media Days.

Was able to join @jenbielema yesterday for our first joint visit to the Doctor. Insanity when I heard the heart beat! pic.twitter.com/KRpbUtvDoQ

The couple is now the proud parents of a baby girl!!!! They welcomed little Briella Nichole Bielema in August 2017=Bielema announced the news via Twitter.

“I was fortunate to bring a baby girl into this world less than 48 hours ago and have 10,000 responses to a picture of my daughter that I sent out, Well, the replies and the feedback I got back, I heard from players from a year ago to 10 years ago to 15 years ago that talked about what we did in our time together that’s carried through the years.”

He further responded that becoming a father has changed his view on life.

Don't Miss; Football Coach Nick Saban Has Two Special Gifts, a Son and a Daughter After His Marriage With Terry Saban

Well having a child also means having to forget sleep. When asked about that, Bielema said:

“I really don’t think he got that much sleep already as it is, And now, he’s really not getting much sleep. It’s a really special time for him. I’m really excited to see him as a father.”

It seems the family of three are having the best times of their lives.

You May Visit Marriedwiki.com/article for Interesting Gossips and News!!!