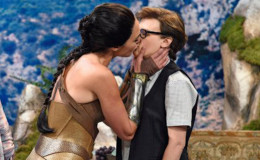 The crowd cheered and it really caught headlines and although it was just a skit, it raised temperatures on screens!

In the sketch, which was mostly centered on a sexual desire and comedy started with Gadot in the paradise of Themyscira, training along with fellow Amazonia warriors including Leslie Jones. 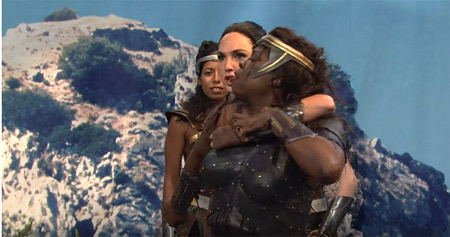 And in the meantime, a rowboat along with tourists, Kate McKinnon and Aidy Bryant came ashore, getting excited about finding the lost island of Themyscira. The skit took a funny turn when McKinnon and Bryant reveal each other as lesbians looking for some good time.

"I guess I'll cut to the chase; show of hands, who all here is a lez. Is it everyone or do we have a couple of allies?"

Other Themyscirian ladies were not going with the flow but Gadot took the chance to comfort them and even asked them to put their heads on her tits. She added that she wants to experiment and see if she feels anything. 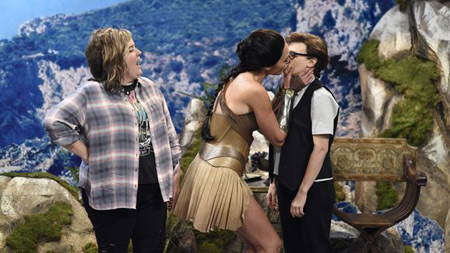 McKinnon stepped forward to the deal and Wonder Woman locked lips with McKinnon sensually for 13 damn seconds! Then, she said,

It was a really funny moment for Kate and Aidy and both ran off in their boats to their land that said "Lesbos", Laugh Out Loud!!

Check out the full video here below!

Before this Gal starred in a sketch in which she teased a hallucinating Kenan Thompson in the desert and a spoof on Cinderella. She is starring as Wonder Woman in the movie Justice League which is all set to be released on November 17.