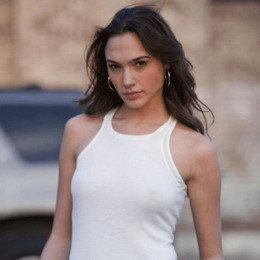 An Israeli actress and fashion model who is popular for her role as Gisele Yashar in Fast & Furious, Fast Five, and Fast & Furious 6. She was born in Jewish, Israeli family environment. She served Israel Defense Forces for two years. She has been a leading model for Castro since 2008. She has also featured on a cover page of popular magazines like Cosmopolitan, Bride Magazine, and FHM. She also made a brief appearance in action-adventure Knight and Day. Recently she has been chosen as the new face of Gucci's Bamboo fragrance brand.

Beautiful ‘Gal Gadot’ is an Israeli actress and model. She was born as Rosh HaAyin on 30 April 1985 to Irit (nee Weiss) and Michael Gadot. Her parents Hebraized their surname from Greenstein to Gadot.

She is best known for her role as ‘Gisele Yashar’ in ‘The Fast and the Furious’ series who holds Ashkenazi Jewish ethnicity and Israeli nationality.

Gal Gabot was a biology student in her school times and was successful at basketball because of her tall height. She went to Reichman Law School for studying the law. Gal won the title of Miss Israel in 2004 at the age of 18-year-old. Later she represents her country in Miss Universe.

Gal Gadot served in the Israel Defense Forces as a soldier before entering to acting. According to her, ‘The time which she spent in the military made her a well-disciplined person”. She faced many criticisms on Twitter for being “Zionist’’ and joining the military service.

Her victory over Miss Israel helped her to enter the world of modeling and acting. She started her acting career from Israeli drama Bubot but Fast & Furious helped her to get noticed in front of an international audience.

In 2012, Gal Gadot holds the fifth position on the list of the 50 most talented, intelligent, funny, and gorgeous Jewish women in the world". She has been the face of many international brands including; Captain Morgan, Gucci, Huawei, Miss Sixty and much more.

She has featured in Cosmopolitan, Glamour, Bride magazine, Fashion etc. as a cover girl. Gadot worked in Batman V Superman: Dawn of Justice’ along with Ben Affleck and Henry Cavill.

In 2018, Gadot secured her position in the list of the 100 most influential people in the world on Time's annual list.

Her new movie, 'Wonder Woman 1984' is expected to be released in 2020 but her fans won't be waiting for her for that long time. Some sources reported that she will dub the character od Diann in the Lego sequel.

The Lego Movie 2 is scheduled to be released in February in the United States and in April in Israel.

On June 2, 2017, she appeared in Wonder Woman as a lead character. She portrays the role of Diana in the Princess of the Amazons. The film did impressive collection in the box office as it has 97 percent positive rating on Rotten Tomatoes higher than any other superhero movies.

Her performance over the movie was well appreciated by her fans and critics. It was the highest-grossing live-action motion picture ever with a female director, Patty Jenkins with a total collection of $318 million stateside and $652 million internationally.

Gal Gadot is a happily married woman. She exchanged vows with Yaron Varsano on 28 September 2008. Her husband is an Israeli real estate developer. The duo was blessed with a daughter Alma Varsano.

In November 2016, Gadot and her husband announced that they were expecting second child by posting a picture on social media and in 2017 March she welcomed her second daughter Maya Varsano.

After playing the character of wonder woman, in 2016 she was named an Honorary Ambassador for the Empowerment of Woman & Girls by the United Nations as well she was invited in New York City by Un for speech.

Forbes ranked gal as one of the second highest earning models from Israel. She has a total net worth of around $10 million as of January 2019. Gal and her husband owned a luxury hotel in Tel Aviv which they sold in 2015 for $26 million.

The 33-year-old actress is a brand ambassador of many famous brands like Gucci. She is a motorcycle rider and she owns a black 2006 Ducati Monster-SRS cost around $8000 dollars.

Gal signed a three-picture deal; Batman v Superman, Wonder Woman and the upcoming Justice League with $300k per film but it was believed she get a bonus for Wonder Woman success.

Professionally he is an Israeli businessman. They are happily married with one beautiful daughter. Couples's picture can be found in different sites.

She is the only daughter of the family. Her pictures can be found in social media sites with her parents.