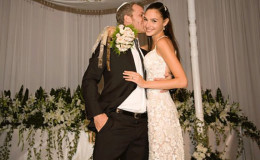 Gal Gadot is known for her tough roles in movies but this tough and hot actress has her beautiful family to adore for. She married Yaron and the couple are very happy and they both are expecting their second child together.

Gal Gadot is an Israeli actress and a former Miss Israel. Even though she is a tough woman due to the fact that she served in Israeli Defense Forces, but her heart is just like all the other women out there.

Gal married Yaron Varsano a long time ago and the couple is enjoying their married life and on top of that, they are blessed with parenthood as they have a child together. Let us discuss them and their relationship in detail.

Gal tied the know with Yaron Varsano on 28 September 2010. Yaron is an Israeli real estate developer. They first met at a party in Israeli Desert.

She is not shy about showing off the love she has for her husband. The duo is often seen in romantic poses in their pictures on social media.

Yaron was born in Amsterdam, he attended International School of Amsterdam and graduated from New York Institute of Technology in 2000.

After one year of their marriage, Gal gave birth to their first child, a girl named Alma Versano in November 2011.

The pair was very happy about the moment. During an interview with Jimmy Kimmel, she told that the greatest perk for landing the role of Wonder Women is that her daughter is very happy and super proud of her mommy being a superhero.

She said, that whenever they are in a park for a stroll her daughter brags to her friend that her mommy is a wonder, woman.

Announcement of having another child with Yaron

On November 7, 2016, she announced on her social media account that she and Yaron are expecting another baby.

The couple posted a very beautiful picture of each other on Instagram.

So excited to share this wonder with you... #mommyforthesecondtime

Gal and Yaron are now going to welcome another beautiful soul in their life. The couple is very happy about the news and so are the fans all around the world.

They are now together for more than a decade and they seem to be the best couple in the world.

Their love for each other won't fade away and on top of that, they are enjoying parenthood for the second time. What more can a couple ask for!