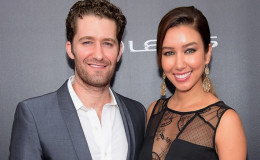 Glee Star Matthew Morrison is Happily Married to Renee Puente and has welcomed their new baby. Also, see his relationships and past affairs.

A big shower of congratulations to Matthew and Renee!!

Actor Matthew Morrison and the "High School Lover" actress Renee Puente welcomed their first baby boy this October. The couple has been married since 2014 and the new parents are very excited about the child. Let us find out in detail about the couple relationship.

Matthew Morrison and Renee Puente; New parents to a baby-boy

The lovebirds: Mathew and Renee tied the knot in an intimate Hawaiian ceremony on the island of Maui on October 18, 2014, after the 15 months of engagement. After the 3 years of happy relationship, the couple on May 17, 2017, gave a good news about them expecting their first child.

Matthew so excited to welcome his baby with Renee his happiness and excitement through the Instagram posts.

Our #MorrisonAdventures have been so epic together, but they have only just begun!! We will have a new addition to the family and I'm blown away by the unconditional love that I already possess for this child. I have such a clear vision of the Father that I want to be, but the perfection lies in the balance and teamwork that Renee and I have cultivated. Now, we simply wait with open arms.... Thank you @noelmaitland and @isaaccohenphotography for this awesome video!

Best thing in the world to come home to!! My world!! @reneemmorrison

The new father Morrison shared a heart-melting black-and-white snap of himself fist-bumping his first-born son.

To my Newborn Child, Revel James Makai Morrison: Your Mama and Papa got this!! Trust in us to guide and protect you always. To lay the tracks so your choo choo train will run smoothly throughout this world??. You will have all the tools to soar! We love you, and are so thankful for your arrival! The adventures are just beginning... ??: @isaaccohenphotography

Similarly, Reene also shared the photo of the baby on his father's arm on her Instagram. With her emotional vow, she promised to cherish every moment with Matthew and newborn baby Ravel.

I’m in Revel Heaven... my heaven on earth... to give you life, to hold you in my arms, to comfort you, to feed you from my body.. I can’t begin to express my immeasurable gratitude for being the one you chose as your Mama! My Revel James Makai Morrison, I promise to cherish you, to constantly remind you that you are worthy of love and belonging, to teach you compassion and kindness. I will respect you and go through every moment with understanding and patience.. I promise to love you unconditionally for ever and ever my little angel baby.. my squeaks.. my moon ?? I see so much of your Papa in you already.. I feel the calm I once felt inside of me.. I cry from the overwhelming joy of finally being able to see your face that is perfection! My little wiggle worm... I hold my belly even now with sweet reminiscence.. I am so proud to finally share you with the world. Here he is ladies & gentleman... Our Revel James! #oneandonly #thereal #morrisonadventures ??: @isaaccohenphotography

...my life wrapped up in this beautiful little photo... I am consumed by these 2... it’s hard to grasp. This connection.. To fully understand the meaning of this life & this love.. my purpose!! For ever and always... my boys... my LIFE! Mau Loa @_matthew.morrison_ #inspired #breastfeeding #purpose #givinglife ??: @isaaccohenphotography

In an interview with People, Matthew discussed his then-plans to spend Father's Day in Europe as he said:

"My Father's Day, we're actually going to be on our babymoon. We do feel like this will be our first Father's Day, we really celebrated Mother's Day this year for Renne. We'll be just enjoying our travels before we have our addition."

Once again congratulations Matthew and Renee!! 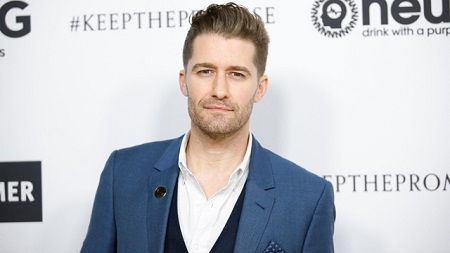