Home Article Holly Sonders and Erik Kuselias' married life, Are they getting a divorce? Know about their family life and children

Holly Sonders and Erik Kuselias' married life, Are they getting a divorce? Know about their family life and children 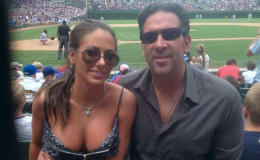 TV and radio host Erik Kuselias got connected with to Holly Sonders, 3, a successful golf analyst for the Fox Sports' golf Coverage group. After making a couple of public appearances together and flirting with one another, finally, they brought the News about their engagement in 2012.

The couple tied a knot in 2012. It was shocking for all her supporters and fans on her decision of marrying a man who was in his Forties. Though both husband and wife were successful in their profession currently their married life has been a roller coaster ride.

Is their Marriage Heading Towards Divorce?

'Best Friends for Life, Husband and wife'. Currently, this quote has been unsuitable for the Holly Sonders and Erik Kuselias.

Things are not going well between them. Currently, the news about this couple’s divorced has hit the media. As we already told you about Erik's bad reputation.

Recommended: Radio host Erik Kuselias and Golfer Holly Sonders married life. Do they have any children?

He was known for sexually flirting with his co-workers.  When Holly came to know her partner's character, she hired a private detective and found out her husband's ongoing relationship with ESPN senior writer Stephanie Bell.

Reportedly Erik was suspended by ESPN for sexual harassment case in 2009. On a Party where both them were present, he tried to flirt with ESPN Personality Stephanie Bell saying, “I would like to fuck you”.

And after an "insanely boring" past week... Somebody else is thrilled to be home too. #ek #chess #letsplay

It is true that they split for some time after finding out the truth but divorce has been never their first choice. Being in the field of media, it is probably hard for the couple to keep their relationship secret.

Do they have any child?

If this is the question in your mind then the answer is no. Though, it’s been almost four years of their marriage they do not have a child.

This may be because they are more focused on their career than having a baby. With this also, people started assuming how their relationship is going on.

Erik Kuselias is a TV and radio host. Currently, he is the co-host of Pro Football Talk with Mike Florio and NBC Sports Radio host on the NBC sports.

Previously, he hosted Morning Drive on Golf Channel, NASCAR Now on ESPN2, and The SportsBash on ESPN Radio.

In 2008 NASCAR season, he was succeeded by Nicole Manske. One year later, he made his arrival to ESPN Radio with the show called 'The Erik Kuselias Show'.

Additionally, Erik has appeared on the radio shows like 'Mike and Mike' in the Morning. Likewise, he was also the host of the Emmy Award-winning online show called Fantasy Football now.

In mid-2011, he joined the Golf Channel as a co-host for the show Morning Drive however in May 2012; he cleared out the show and moved to NBC Sports.