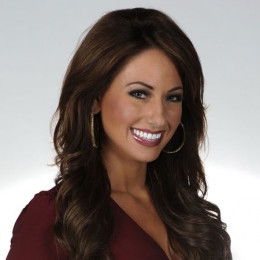 The astonishingly beautiful Holly is a professional American golfer and television personality, currently working for the Golf Channel hosting the shows School of Golf and Morning Drive. She is regarded as one of the hottest lady golfers of all time.

Holly Sonders was born as Holly Niederkohr was March 3, 1987, in Marysville, Ohio, USA, to Dan Niederkohr and Sandy Niederkohr. She belongs to the white ethnicity and holds an American nationality.

Sonders was interested in golf since her childhood days and she has earned all-league and all-district honors for four years and was named league and district MVP. She majored in journalism at Michigan State University.

Holly began her career as a news broadcaster in Little Rock for a year and later worked in Golf Channel in 2011. At the Golf Channel, she rose to fame with the shows like Morning Drive, School of Golf, and Playing Lessons with the Pros.

I am taking Maximum Security to win this years KY Derby. Cuz I like the name, nothing more. What say you?????

In 2015, she was featured on the cover of the online portal Golf Digest. Sonders left the golf channel and joined Fox Network. She served as FOX Sports’ studio host during the 2016 U.S. Open.

Sonders has appeared in GOLF.com’s Most Beautiful Women in Golf three times. A former golfer, she made her debut as an NFL sideline reporter at the end of 2015.

Sonders is a married woman, she ties a knot with Erik Kuselias, the host of "Erik Kuselias Show" on NBC Sports Radio. The couple hasn't any children yet. The duo tied the knot in May 2012 in an intimate ceremony.

The duo is together for a long time and shared a good bond with one another. There aren't any kinds of rumors regarding their dispute and divorce. But recently there is news about their divorce and seems like they are not living together.

Currently, Holly Sonders has an impressive net worth of $6.5 million from her career. She earns a huge amount of money from her anchoring career.

As a sportscaster, Sonders worked in several television stations and has managed to make a good fortune.

He is the only husband of Holly, who by profession is a television and radio host. They have a huge age gap and this is Erik's second marriage.