Home Article Is Actor Chai Hansen Dating a Girlfriend? Find his Relationship Status; Once Rumored To Be A Gay

Is Actor Chai Hansen Dating a Girlfriend? Find his Relationship Status; Once Rumored To Be A Gay 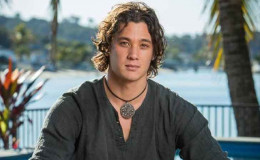 Its a subject of great disturbance that the media and the fans of celebrities that are responsible for their success sometimes cross limits and end up hurting the very star unintentionally. There might be only a few stars that have not fallen prey to baseless rumors and news.

Chai Hansen is one of the actors that has gone through this swamp of inevident speculations and allegations. Being a handsome star, the rumors of ones alleged relationships is always out there but when it comes to one's sexuality, a line should be drawn and there should be a thing called personal space even for public role models.

Moreover, it seems he is waiting for the right girl in his life however, Chai is often seen hanging out with a girl on various occasions. There are speculations that Chai is dating her, but the name of the girl is yet to be revealed.

The rumors of his secret affair came from the Mako Mermaids Twitter account where he shared adorable pictures of him and his alleged girlfriend. Unfortunately, the twitter account got suspended as of now so further investigations into it are not possible.

Also Read: Is Australian Actor Brett Tucker dating anyone after breaking up with Eliza Taylor? Does he have any girlfriend?

We can only assume the conclusions that either Hansen already broke up with his alleged girlfriend or he might be dating her in secret. We can only speculate what is and what isn't until it is officially confirmed.

Chai Hansen Past Relationships And Affairs

Around the year 2016, the actor got himself into speculation that he was in a relationship with his Mako: the Island of Secrets, co-actor Ivy Latimer due to their closeness and good chemistry. Having worked with the likes of Gemma Forsyth, Amy Ruffle and Allie Bertram, his closeness to Ivy was undeniable.

The two often posted pictures of them together in their social media accounts which sparked the fire about their alleged affair. He posted a pic of them dancing together in his Instagram and reading the comments, it seems his fans were really anxious to see them in a relationship.

@kitkatsmeow May have better hair than me but in terms of dance moves... debatable.

But the rumors were strictly denied by both of them and they both condemned such speculations. Needless to say, the fire burning in the hearts of the media to find out about Chai's love life was not put to rest and new news about him came into existence.

Don't Miss: Australian Actor Eka Darville is secretly Dating his Girlfriend and has a son together. Find out who is the Mother of his Child

Just after making the denial of his rumored relationship, he became the victim of the vicious media circus and news started floating around that he is gay.

Although unconfirmed, word has it that it was because of his roles as a merman and his photographs on social media, that fueled this nonsensical fire.

Chai Hansen in the sets of Mako Mermaids as a merman.
Source: Pinterest

Chai was silent about these speculations and accusations but his co-workers and friends could not bear such baseless news about him and spoke up about it and cleared the air.

Anyway, the relationship status of the star is a mystery to solve among others. But let’s hope the actor finds the love of his life soon and be in a healthy relationship as his fans are eager to this handsome actor in love.