Home Article Is Alison Doody Still Single After Divorce From Gavin O'Reilly? Who Is She Dating Currently? Know Her Affairs And Relationship

Is Alison Doody Still Single After Divorce From Gavin O'Reilly? Who Is She Dating Currently? Know Her Affairs And Relationship 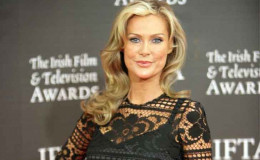 You never know what life has in store for you, hence, life wants you to expect what is unexpected. Some people go through unanticipated troubles whereas others are gifted with unexpected joys in life.

Irish actor Alison Doody is one such example who enjoys a life which she least expected. As a child, she never thought she would end up in acting but she is among some of the famous Irish actresses today.

Read everything in detail about Alison's personal life.

Is Alison Doody Still Single After Divorce From Gavin O'Reilly? Who Is She Dating Currently?

Alison Doody is best known for her roles in movies like A View To A Kill, Indiana Jones And The Last Crusade, A Prayer For The Dying, etc. She was able to impress many producers from her debut Bond film, A View To A Kill.

As of 2019, Alison is single, however, she was in a couple of relationships after her divorce from O'Reilly.

Alison got engaged to foodservice professional Tadhg Geary on October 19, 2014, in Paris. They first met in late 2012 in a restaurant in Ballsbridge through their mutual friends.

The year 2015, however, was not a favorable year for them and they called it quits in March of that year. Nonetheless, their divorce was a unanimous decision and they are still great friends.

Previously, Alison dated Douglas De Jager in 2012. They reportedly met in 2011 when Alison was shooting for comedy-drama, Beaver Falls. It is also believed that Jager paid frequent visits to Alison in Ireland.

Unfortunately, Jager died of heart attack when the duo was celebrating a holiday in Capri, which left Alison heartbroken.

Before her two unsuccessful affairs, Alison Doody was in a 12 year-long married relationship with Irish-born businessman, Gavin O'Reilly.

She tied the knot with Gavin on June 25, 1994, and their marriage lasted for 12 years before separating in 2006. According to The Guardian, they separated back in 2002 and finalized their divorce in 2005.

You May Like: American Actress Amanda Plummer, 59, Happy To Be Unmarried; Know Her Past Affairs And Boyfriends: Also See Her Long Journey of Acting Career in Hollywood

There might be miscellaneous reasons behind her divorce from O'Reilly but the exact reason is not known.

Initially, Alison was happy to be a millionaire businessman Gavin's wife, but she gradually experienced the pain of staying out of the entertainment industry.

Talking to the Sunday Times, she once said that she was excited as a mother but she couldn't enjoy a dependent life.

"Once you have worked and you're independent, it's hard to give up that independence."

Being out of job often led her to depression. She returned to the movie after more than a decade but she never found herself as ambitious as she was before. Nevertheless, her sole focus seems to be her acting career.

#tbt Last week being honored with a Star on the walk of fame... Thank you Almeria for your wonderful hospitality. . . . #interview #media #movies #almeria #actress #award

In spite of unfavorable circumstances in her life, she is strong enough to get back on track.