Home Article Is American Footballer Jimmy Garoppolo Dating a Girlfriend or He Is Secretly Married and Enjoying Life With His Wife?

Is American Footballer Jimmy Garoppolo Dating a Girlfriend or He Is Secretly Married and Enjoying Life With His Wife? 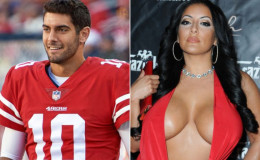 The American football quarterback James Garoppolo is well known for being the starter for the San Francisco 49ers of the National Football League. Regardless of his success in his career, fans now are in utter silence regarding his relationship. Let's find out more about the footballer Jimmy Garoppolo's dating relationship including his other affairs.

Neither is the American footballer Jimmy Garoppolo married nor he shares any children with any women. Looking at his Instagram profile, there is not much to talk about the man's relationship as he keeps a lid on it.

The second-most sellable NFL star is presumed single, but you know how these big sports stars are like. They keep a close tab with on their personal life and out of nowhere reveal they are married.

Just a few weeks ago, Jimmy made headlines during an interview in the sidelines, when he called Fox NFL reporter Erin Andrew, 'Baby.' When Erin asked him after his game on November 1st as to how it feels to remain undefeated, Jimmy replied, “Feels great, baby.” Take a look at the scene!

The interview became viral instantly and was all over the internet. Unfortunately for him, Erin is a married woman and is in a marital relationship since 2017 with Jarret Stoll.

Jimmy previously involved in a dating relationship with his ex-girlfriend Alexandra King. Alexa is a model and fashion designer from Boston. 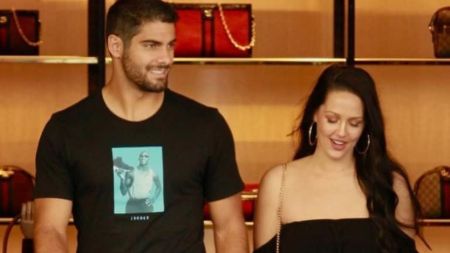 Alexandra originally went public with Garoppolo in February, posting a sweet Valentine’s Day snap on Instagram. Their first apperance came when both of them were packing on a PDA-filled Disneyland tour.

Reports say that Jimmy started dating her since his time with the New England Patriots. Yet, the duo's still left to make their public appearance together.

waiting on the piece to complete me ??

Well for Jimmy, he stays away from the limelight when it comes to his current dating life and girlfriend. Talking about his personal life, he is quite conscious and ironically a statue to open about his private matter.

Be that as it may, Jimmy enjoyed his blissful romantic relationship with Alexandra outcasting any media attention that hinders his life. As of now, he is currently single not dating anyone.

Being a skillful and handsome bachelor, Garoppolo breaks the headlines not only cause of his games and injuries but also for his dating history and girlfriends.

The 27-year-old football quarterback was once rumored to be dating one of the prolific adult star, Kiara Mia. 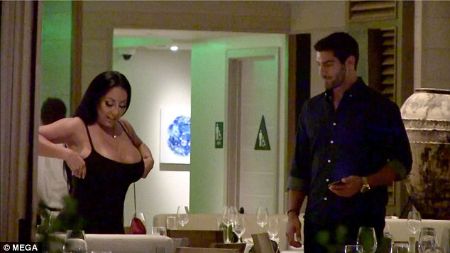 Although Kiara and the 49ers relationship took off like a rocket in social media, both of them remained mum when speaking about their romance. Nevertheless, asking him about the meeting with Kiara, Jimmy admitted;

“My life off the field, I’ve never really been big on being very public with things. Even social media, I’m not out there a ton. My life’s looked at differently. I’m under a microscope.”

Reportedly, Jimmy confirms that he isn't even sure how they become an item for headlines, while others allegedly revealed that the duo dated. Garoppolo is in his 20s whereas his alleged partner is in 40s. People wonder how the two fell for each other.

Garoppolo was criticized by some commentators for romantically linked to the adult star in public being a star of NFL. Nonetheless, some of his seniors and fellow partners defended him by saying his love life does not affect his career nor his team.

Back in late 2018, one of the player's fans writes, Jimmy Garippolo is the franchise quarterback of a pro-NFL team. He should have more values and class than parading an adult movie star in LA. Slam me for saying that, but guarantee someone in his camp said the same.

Playboy Model CALLS Out Jimmy Garoppolo For Being CHEAP!

What 49ers know about Jimmy Garoppolo after 16 Career stats?

For San Francisco 49ers quarterback, questions regarding his durability and ability have risen ever since he joined the team.

In the past weekend, Garoppolo set two milestones which in most cases wouldn't qualify as milestones. Jimmy made his 16th NFL start, the equivalent of a full season, and 6th consecutive start, the first time he's crossed that mark.

Those numbers are meaningless to most fresh quarterbacks. Garoppolo hasn't shown interest in them. Either they are notable cause it's taken him five seasons and seven weeks to get there.

It's been essential for both Garoppolo and Niners. The 2018 season was said to be his official unveiling, his initial season as the full-time starter. Rather, he played the only short of three full games prior to the knee injury ended this season.

Some interesting Facts of Jimmy Garoppolo 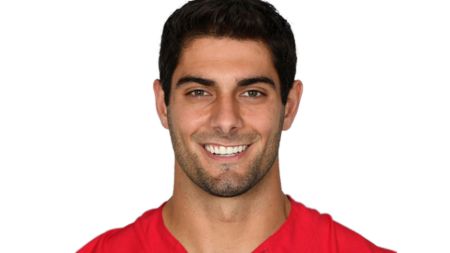 For all the latest biography on your favorite celebrities, make sure to follow MarriedWiki!!!