Is Basketball Hall of Famer Bill Russell single after his three divorces? 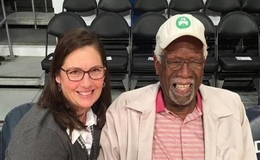 NBA legend of all time Bill Russell endured some serious ups and downs when it comes to his personal life including his tough upbringing in a racist town of Louisiana and three failed marriages.

Bill Russell; Life In A Nutshell

Russell who grew up in poverty in California after partly spending a slight portion of his childhood in Louisiana where his parents faced constant racist taunts, decided to celebrate the milestone privately with his nearest and dearest ones. 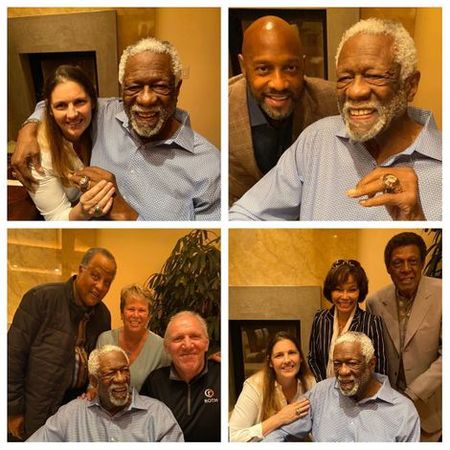 Of course, the gold medalist Olympian made sure to share the happy news on Instagram with a deep message alongside a family picture. In his words, he wrote:

"In a private ceremony w/my wife & close friends A.Mourning #anniemeyersdrysdale @billwalton & others I accepted my #hof ring. In ‘75 I refused being the 1st black player to go into the @hoophall I felt others before me should have that honor. Good to see progress; ChuckCooperHOF19 @nba"

And, in the picture, among his acquaintances were present his beautiful wife, Jeannine Russell.

Who is Jeannine Russell?

Often seen together at public events with the first American college player of the Black race, none other than Bill Russell, Jeannine Russell is the player's current and also the fourth legal wife. Matter of fact, Jeannine rose to quick fame after her marriage with Russell. However, she is not to be mistaken as the Dennis the Menace actress Jeannine Russell. 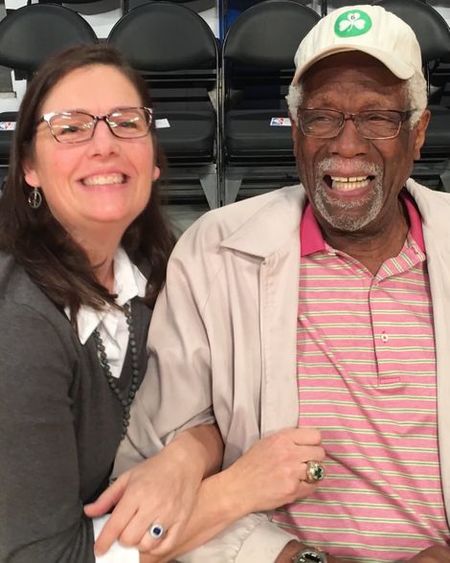 Russell, also a social activist, who keeps his personal life much closer to his vest has preferred to keep many details of his fourth married life as secretive as possible. Bill and Jeannine, however, share more than three decades of an age gap.

When Did Bill And Jeannine Tie The Knot?

Whilst Bill celebrates his 85th birthday in February this year, Jeannine is in her early fifties. And, as revealed by fellow NBA champ; Bob Cousy in an interview, Bill married at age 84 to Jeannine when she was 49.

This is not Jeannine's first marriage either as she was previously known with her old names; Jeannine Florito and Jeannine Maddux, according to Fab Wags. In the meantime, Jeannine is the main motivator and supporter Russell. 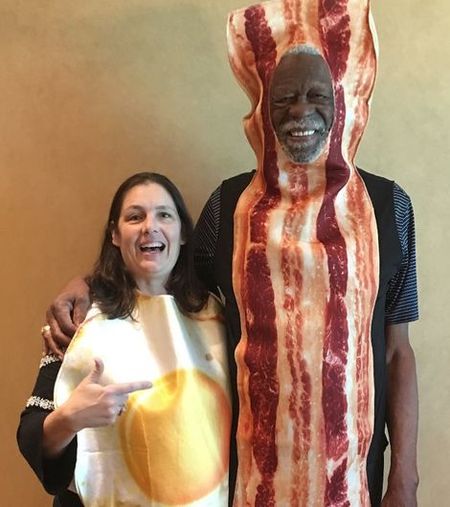 In fact, it was Jeannine who created the social media accounts of her husband and helped him use them. And, that came pretty beneficial for Bill who can now share pictures and update his social media himself.

From throwbacks of his old NBA days to being honored by the former president, Barack Obama to sharing birthday cakes made by Jeannine for him to Halloween stories, Bill can be now seen regularly updating his Instagram with his daily life whereabouts.

Bill might be relishing a successful married life but as the public can always comment and gossips over the celebrities' lifestyle and choices, the NBA player, specifically Jeannine often receives criticism on their marriage.

Poor Jeannine, the public has brutally referred to her as a gold-digger for marrying a much senior rich citizen. Some of the uncomfortable comments on Bill's Instagram even call out Jeanine as if she is waiting for Bill to perish soon so she could enjoy his wealth.

This is not the only problem their marriage faces though as Jeannine's race is another main factor as Bill also received some negative hearings for marrying a woman of the white race whilst being a Black man. But, neither of the couples has ever paid attention to respond to the ugly remarks, gladly.

In the meantime, Bill and Jeannine share no offsprings of their own. The Bolton Celtics, however, is already a father of three children from his first wife.

The first and foremost marital relationship of Russell count with his first wife, Rose Swisher who is a regular person and someone the NBA pro met during his college life at the University of San Fransisco.

Altogether Rose and her college boyfriend remained together for nearly two decades. More precisely, changing their college affair to a marriage relationship, the former spouses tied the knot in 1956 prior to their divorce seventeen years later in 1980, sadly.

The reason behind their split is reportedly caused by the loss of feelings and longevity towards each other. And, in the lifetime of their marriage, Rose mothered now- three adult children of Bill.

Bill and Rose's first child, Karen Russel, younger than Jeannine was born in 1962. Their other children include two sons including Jacob Russell and William Russell Jr. None of Russell's children, however, followed their father's footsteps though.

Matter of fact, if anything, Russell's children as well as maintain a lowkey profile from the public attention, leaving the exception to Russel's first child who is quite active on Twitter.

Much likeness to the greatness of his father, the eldest Karen is a Harvard graduate. The tv pundit is a lawyer professionally though. In addition to her accomplishments, she has already been the delegate's representation of Obama and the 2020 Presidential election candidate, Bernie Sanders.

Daughter Karen Is A Lawyer

Other than that, Karen's article titled 'Growing Up With The Privilege and Prejudice' which was published by the New York Times earned much attention and appreciation from the readers.

The article was all about her childhood and growing up as the child of a Black celebrity in a racist America as she mentioned how there would be mob and destruction at her garbage can every time her father would be on the road.

In her words, the Harvard alum added:

"My father went to the police station to complain. The police told him that raccoons were responsible, so he asked where he could apply for a gun permit. The raccoons never came back."

And, speaking of the privileges that came with her link and connection with Bill Russell, the niece of Charlie Russell feels a certain responsibility attached to it. She definitely believes in Nepotism that can enhance a career but, she also believes that you're always obliged to give back to utilize the privilege, something she learned from her parents. 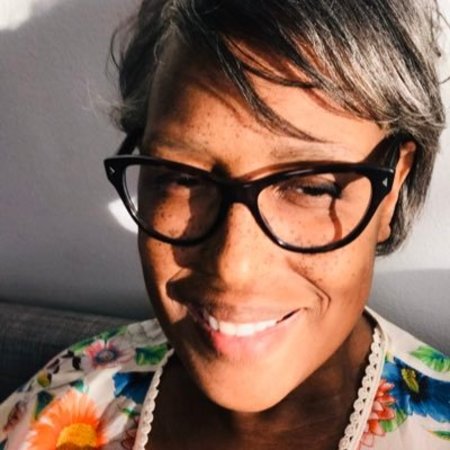 Like a father-like daughter, Karen isn't scared to express her personal views either, especially in concerns to politics on her Twitter account where she has a bunch of thousands of followers. Not to mention, the bold woman has publicly criticized Republicans and President Donald Trump.

Karen's Twitter feed is actually full of memes and trolls regarding Trump and his actions and policies. And, other than that, the proud daughter of Bill also does charities and support fund.

What About Bill's Sons?

Moving towards the other children of Bill Russell aka his sons, William Jr. has worked as a restaurateur whilst his brother Jacob is a graduate of the Art Institute of Chicago.

All of Bill's sons are settled with their life. But, obviously, they choose to carry on to live a normal and private life. Whatsoever, Bill is proud of his upbringing of his children as he made sure to teach them how to tackle and cope with the system.

Russell Falls In Love For The Second Time

Four years later of separating from his first wife, Russell then tied the knot for the second time with beauty pageant queen, Dorothy Anstett in 1977. Well, who is Anstett?

Anstett, who is in her early seventies today, as of November 2019 is the former Miss America who won the title in the year, 1968. Matter of fact, she was also the reigning Miss Washington the same year.

Speaking more of Dorothy who is also known as Didi's professional journey as a beauty pageant titleholder, she represented her home country in Miss Universe and was one of the top 5 finalists in the competition.

Meanwhile, Jeannine isn't the only first White wife of Bill or the first marriage and relationship that stirred up attention from the public. The duo got hitched in 1977 at a time when interracial marriages were still hardly recorded and done.

Matter of fact, their marriage didn't happen until ten years later of the legalization of interracial marriage in the US. Whatsoever, Bill and Dorothy became unable to keep their marital spirit alive and split after three of togetherness in 1980.

Additionally, the ex-couple bore no children of their own together. As for Miss Anstett, she went MIA and lives a normal life away from the public and media attention.

Russell Marries For The Third Time

Since breaking up with Dorothy, Bill Russell didn't marry for the next thirteen years until he finally met the one he found himself compatible with. And, this time, the lucky man exchanged marital vows with his third wife, Marylin Nault, a jewelry salesperson, on 17th February 1996.

Marylin who grew up in Concordia, Canada only moved to Seattle following the end of her high school days. Bill and Marylin's marriage successfully lasted for thirteen years which included constant traveling to a lot of places across the States and world.

The two remained together until the death of Marylin tore them apart on 21st January 2009, when she was only 59, sadly. Bill farewelled his beloved deceased wife at Virginia Mason Hospital where she took her last breath.

Life of Bill Russell After Retirement

Aside from relishing a sound life with his beloved wife aka Jeannine Russell, the NBA champ Bill Russell is involved in charities for mankind. The former Boston Celtics coach has been involved with charities and non-profit organizations.

Not to mention, Russell founded his own nonprofit organization called Mentor in Boston which focuses on mentoring relationships. And, in July 2021, Russell announced he would auction some of his valuable prizes including awards, rings, jerseys, pictures, and Basketballs to share with the public.

Russell announced the profits of the auction which will be hosted by Hunt Suctions will be donated to his organization and Boston Celtics United for Social Justice. The auction will be taking place in the fall or the winter of 2021.

Meanwhile, Russell and the late NBA Famer Wilt Chamberlain who played against each other on the court were friends in real life. Their bonding was so good that Chamberlain who played for the Philadelphia/San Francisco Warriors and the Lakers would have Russell staying at his place the night before their game where he would be defeated. The friendship between Bill and Will even grew deeper after the assassination of MLK after which the two protested for equality.

View more Gossips as well as Biographies on Marriedwiki.com.