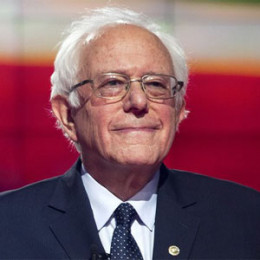 Bernie Sanders is an American politician serving as the junior United States Senator from Vermont since 2007. The longest-serving Independent in congressional history, he was first elected to the U.S. House of Representatives in 1990 and caucuses with the Democratic Party, enabling his appointment to congressional committees and at times giving Democrats a majority.

Bernie Sanders was born on September 8, 1941, in Brooklyn, New York to father Elias Ben Yehuda Sanders who immigrated to the United States and became a paint salesman. His mother is Dorothy "Dora" Sanders and she was born in New York City to Jewish immigrant parents from Poland and Russia.

Sanders lived on East 26th Street in Midwood, Brooklyn where he attended elementary school at P.S. 197 in Brooklyn and he attended Hebrew school in the afternoons and celebrated his bar mitzvah in 1954.

Sanders attended James Madison High School in Brooklyn where he lost his first election, finishing last out of three candidates for the student body presidency. Not long after his high school graduation, his mother died at the age of 46 and his father died a few years later on August 4, 1962, at the age of 57.

Sanders studied at Brooklyn College for a year before transferring to the University of Chicago and graduating with a bachelor of arts degree in political science in 1964.

After graduating from college, Sanders returned to New York City and he initially worked at a variety of jobs, including Head Start teacher, psychiatric aide, and carpenter.

In 1968, Sanders moved to Vermont where he worked as a carpenter, filmmaker, and writer who created and sold "radical film strips" and other educational materials to schools and he also wrote articles for the alternative publication The Vermont Freeman.

After his resignation from the Liberty Union Party in 1977, Sanders worked as a writer and the director of the non-profit American People's Historical Society (APHS).

In 1980, Sanders ran for mayor of Burlington at the suggestion of his close friend and political confidante Richard Sugarman. He won and was mayor for eight years, from April 6, 1981, to April 4, 1989.

Under Sanders mayoralty, Burlington became the first city in the country to fund community-trust housing. In 1990, Sanders became the first independent candidate to be elected to Congress since Frazier Reams. Sanders served in the House from 1991 until 2007 when he became a senator.

Sanders joined the race for the U.S. Senate on April 21, 2005, after Senator Jim Jeffords had announced that he would not be seeking a fourth term.

Sanders announced his intention to seek the Democratic Party's nomination for President of the United States on April 30, 2015, and his campaign was officially launched on May 26, 2015, in Burlington.

According to Celebrity Net Worth, as of 2017, Sanders's net worth is an estimated $2 million. Compared to the current president Donald Trump, who has a net worth of $3.10 billion, it's a bit meager.

According to reports, Sanders made $1 million in 2016 out of which, $795,000 came from a book advance. Although the politician's salary from the Senate is rather modest compared to his other career endeavors of around $174,000 in 2016, his other investments and holdings bring his net worth up to the $2 million for last year.

In 1963, Sanders met Deborah Shilling Messing in college and volunteered for several months on the Israeli kibbutzSha'ar HaAmakim. They got married in 1964 and bought a summer home in Vermont; they shared no children and divorced in 1966.

In 1969, Sanders has a son, Levi Sanders, from girlfriend Susan Campbell Mott. In 1988, Sanders got married to Jane O'Meara Driscoll, who later became president of Burlington College.

The day after their wedding, the couple had visited the Soviet Union as a part of an official delegation. Sanders considers Jane's three children – Dave Driscoll, Carina Driscoll, and Heather Titus from her previous marriage, as his own. He also has seven grandchildren.

Don't Miss: List Of 7 Most Scandalous Presidents of the United States