Home Article Is Claudia Haro Still Single After Divorce? Know in Detail About her Married Life, Relationship and Children

Is Claudia Haro Still Single After Divorce? Know in Detail About her Married Life, Relationship and Children

Celebrities often arouse in the spotlight with good and bad controversies. Similar is the case of the American model and actress Claudia Haro known for her work in New Nightmare and Casino.

Claudia Haro Has Found Someone New!

Claudia Haro, the 5 ft 7 inches tall actress is no more single. Indeed, she's found someone new in her life since the mid-2019. Haro is reportedly enjoying a romantic relationship with her mysterious boyfriend.

Most notably, Claudia finally moved on after multiple failed relationships. She's dating a Dodgers Baseball player as Claudia mentioned "My BF & Dodgers Baseball" on her social media platform. She and her beau is currently raising her daughter with the Baseball star and spending quality time with him.

The American actress Claudia Haro is currently single and lives her life blissfully without her husband. However, she married twice in her life but consequently, both ended as a failed relationship.

Initially, the model Claudia married The Home Alone star, Joe Pesci on September 7, 1988. But with some misunderstandings and disputes like other husband and wife, the pair parted away.

Well, the fans might wonder when did all this happen? Firstly, love sprouted between the heart of these two, when Haro met Joe at an Easter Brunch in 1981. Before their marriage, the lovebirds dated for seven years until finally walking down the aisle.

Initially, everything went fine between these two. Even more, their relationship became stronger after they welcomed their first baby daughter Tifanny Pesci. Unfortunately, the romance between the pair didn't go well as they parted their ways after a sudden divorce in 1992.

Be that as it may, the actress later dated and married the film stuntman, Garrett Warren on March 25, 1998. The couple parented a child born in 1999 until the following year they got separated.

Later, Claudia dated Russell Armstrong in 2003 for over a year. Sadly, Russell committed suicide on August 15, 2011.

Claudia Haro's relationship with her second husband didn't end after the divorce with Garrett Warren. She came to a huge controversy following two consecutive murder attempt to Garrett. This even led the model Claudia, sentencing over 12 years in prison. 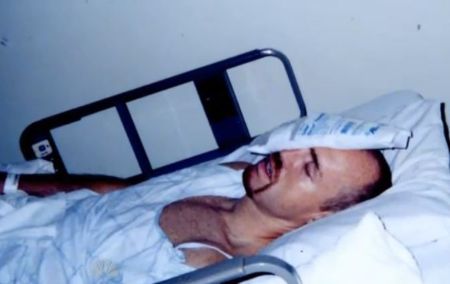 This all started after Claudia's ex-husband got attacked by a strange man in his home in California. Reportedly, Garrett was shot in the chest, eye, neck, and left hip.

Evidently, after the investigation, the police revealed the photographs of Warren, wrapped in the piece of the napkin which also showed the directions of Warren's house. Subsequently, Claudia got suspected behind this mastermind that suddenly happened to Warren after their divorce.

Later, a drug dealer Miguel Quiroz got convicted to the crime scene after they found a hidden envelope in the trunk of his Mercedes Benz. It didn't last long to close the case after Miguel pointed towards the brother of Claudia, Manuel Haro.

After the investigation, Manuel agreed to plead guilty for the crime and revealed that together they hired a hitman to kill Warren for $10 thousand. Moreover, Manuel admitted that Claudia didn't like the shared custody of her child.

In 2005, Haro got arrested for two counts of attempted murder spending 23 months of her time in jail with $1.25 million bails. Sadly, in 2012, Haro got the sentence for 12 years and 4 months to serve in prison at California Institution for Women in Corona, California.