Home Article Jennifer Pfautch Married To Omari Hardwick And Living Happily Together; Know About Their Relationship

Jennifer Pfautch Married To Omari Hardwick And Living Happily Together; Know About Their Relationship 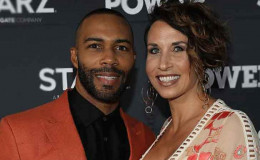 Jennifer Pfautch is happily married to Omari Hardwick with two kids. When the couple got married, Omaris fans were spreading hate speech about Jennifer as they wanted him to marry a black girl but they both stayed together without faltering away from their love.

It is said that true love doesn't discriminate but the world is known to discriminate the lovers. No one can control who you can fall for and love doesn't see race gender or anything else for that matter but unlike love, hate seems to thrive by creating differences of genders and race.

Jennifer Pfautch is a businesswoman and had to face these hate from the world for her love and she showed the world that if you have true love on your side, even the whole world cannot break you.

Jennifer Pfautch is the wife of the actor Omar Hardwick who is best known for his role of Ghost St. Patrick in the drama series Power. The couple dated for a while and the two later were married in 2012 in an intimate ceremony and are now living a healthy and happy married life.

Some sources say that they have been together since the actor's struggling days while he used to live in his car. They are now proud parents of two beautiful children — Nova and Brave— as they welcomed their second child in 2016.

The couple is really happy with each other and is very supportive of each other and the couple happily flaunts their love on social media. Omari posted on Instagram showing his appreciation towards his family.

I would be an asshole to claim to KNOW...so I won’t be. But I imagine motherhood to be the loooongest road ahead. I have witnessed you shoot out the blocks too fast, i have watched you take delight in the twists & turns, & be driven mad by the daunting mountains still to be climbed....& then i have seen you equally catch the perfect pace & trust in your efforts & that God has equipped you with the right pair of kicks or the right strap as our friend 50 would say. Either way, i have watched you run brilliantly at Mama hood with little to no help. Incredible @mrsjaeh. Nova, Brave & i thank you eternally!! & we love you!

The couple is an example of true love to all and their support for each other clearly shines through.

Jennifer and Omari got married after falling head over heels for each other but not everyone had thought that they were made for each other. Fans of Omari, who were predominantly of African-American heritage wanted him to marry someone of his own heritage as Jennifer is white, so they harassed the duo online, calling her names and commented racial slurs on their respective social media.

For a period of time, the comments section was filled with racial bigotry and hates from people but Omari always took Jennifer's side and came to her defense by condemning such comments. He didn't give up on his love and kept fighting for her.

@THEREALSVETLANA she is an array of german japanese native american (as i). But her looks are a duh. Thank u. The other duh is how ugly these

Despite the bad comments and hate, the actor did not care for all those things and rather made the relationship with Jennifer more strong. The best part of Jennifer's life is, her husband and he has always been very supportive of her throughout their married life and we wish them nothing but good life ahead.