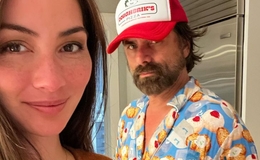 An acclaimed face on television, John Stamos has been a fixture on the small screen for decades. Many love him as the troubled teenager Blackie Parrish on the longest-running soap opera General Hospital, others know him for his recurring stints on the Broadways, and most fervent fans adore the actor for his latent but skillful contribution to music. Stamos's career as a musician may not be the most talked about, but the actor once actively toured with the rock band The Beach Boys.

John Phillip Stamos was born on August 19, 1963, in Cypress, California. Unlike many actors, whose arrival and ascent in showbiz was a chance occurrence, Stamos worked relentlessly for his place. Coming from an unfavorable childhood, the actor recalls always wanting to be an actor. And while most view the constant scrutiny of the stars' personal life as a con of being famous, John doesn't mind the bit of stare and tattle. "You know, these people go, 'Oh, I hate being famous.' If you see me somewhere, ask for a picture. I'm happy to do it because it's what I wanted my whole life," the actor shared in a recent interview.

Stamos's real love life is no less happy than his reel love life. Much like his fan-favorite character, Jesse Katsopolis, in Full House, where he is happily married to his wife Rebecca Donaldson, played by Lori Loughlin, Stamos's marriage with his real wife Caitlin McHugh, exerts the same happy and picture-perfect vibes. But for our favorite television actor, the second time was the charm. John has married once before. 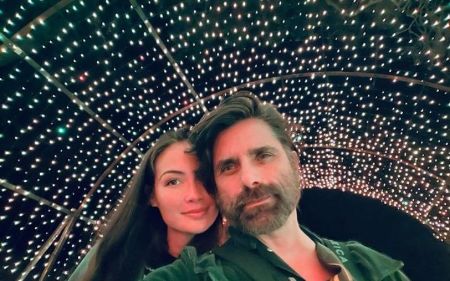 Stamos met his wife McHugh on the sets of Law & Order. SOURCE: Instagram

The General Hospital star came across his wife McHugh on the sets of Law & Order: SVU, and as John recalls in one of his posts, it wasn't much of a romantic situation for a romantic encounter. "Some couples meet at work. Some meet through friends," Stamos writes in a tribute post to his wife. He adds, "I met my wife on a TV show called SVU Law and Order, "where I was playing a serial reproductive abuser, trying to secretly impregnate her by poking a hole in a condom- I already had 47 children but wanted one more."

John Stamos and McHugh reveal their plan for baby number 2!

After their first run across in 2016, the pair met once again as they shared a screen on a short film called Ingenue-ish in 2017. Fast skipping the romance rumors and a long dating stage, the pair announced their engagement later in the year. The surprise engagement announcement came with the snap of them kissing at Disneyland. The pair's whirlwind romance went on with the news of their first pregnancy in December.

A few months into their engagement, the pair tied the knot in a church service at the Little Brown Church in Studio City, California, in February 2018. The Full house actor was on cloud nine when McHugh gave birth to their firstborn son Billy Stamos, in April 2018. "From now on, the best part of me will always be my wife and my son," the actor wrote on his Instagram. 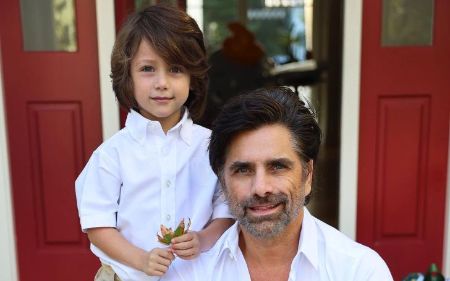 Since delving into their marriage and parenthood in the same year, the couple has consistently kept their fans and followers updated on their family life with frequent offscreen snaps and sweet shoutouts. During the pandemic, the couple explained their desire to spawn further their family and how the unprecedented situation halted their plan.

If there's one thing that you need to know about the Full House actor is that he loves his wife, McHugh, to pieces. Stamos's frequent posts about his beautiful wife and lengthy captions on Caitlin's personage churn our curiosity mill about the actress's work and life. Earlier this year, Stamos penned a lengthy note celebrating their fourth anniversary. "I love you forever, Caitlin. This is us at #sweetheartsnight @Disneyland couple of days ago- we had a magical night. Even though she made me dress as Stitch to her Angel. Happy wife, happy life," John wrote. 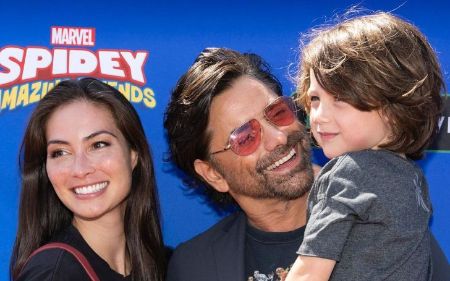 McHugh, a native of Santa Monica, California, is an actress, writer, and model. She may not be as successful as her Emmy-nominated actor, but McHugh's credits are lengthy and stellar. Caitlin was once signed to Wilhelmina Models. She has acting credits in I am a Legend, The Vampire Diaries, and Law & Order. Caitlin's work goes beyond acting and modeling.

The actress has a line of charitable jewelry company called My Saint, My Hero. McHugh's brand 100% proceeds go to child abuse victims. Before falling in love with the Full House actor, McHugh was married to Massimo Lusardi from 2011 to 2014.

Stamos is undoubtedly a one-woman man. While other actors of his caliber take much pride and enthusiasm in pursuing consecutive relationships, Stamos has refrained from following the casanova path. The Emmy-nominated star instead has cemented a gallant image and that of a family man. The Full House actor was married once before. Stamos's first marriage was a decade-long union, considered a lifetime in an industry as flimsy as Hollywood. 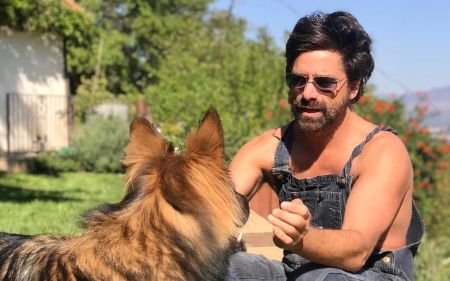 The General Hospital star was married to model-turned-actress Rebecca Romjin from 1998 to 2005. A nearly four-year-long romance preceded the couple's wedding on September 19, 1998. While the pair portrayed a perfect and almost enviable marital life to the world, trouble had reportedly knocked on their doors within a few years of marriage. "We went to that together, but we had already been split up for like six months. I just couldn't say anything," Stamos said while revealing the duo's amicable appearnce at Romjin's X-Men 2 premiere in 2003.

The couple announced their separation in 2004, and Stamos filed for divorce shortly after. "We were together for 10 years — it was heartbreaking," the Full House actor said years later. "I felt like a failure. It wasn't as much about her as it was that the whole thing didn't work," Stamos explained. Romjin, 50, known for her roles in the X-Men series, The Punisher, and Femme Fatale, has since been married to actor Jerry O'Connell, with whom she shares two kids.