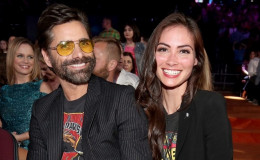 John Stamos's Pregnant Girlfriend Caitlin McHugh Flaunted Her Adorable Baby Bump After Arriving at LA! The happy pair got engaged last October after being in the relationship for two years. John was married to Rebecca Romijn for seven years.

John Stamos and his fiance Caitlin McHugh looked radiant as they walked down the airport platform before flying to Los Angeles.

Caitlin flaunted her growing baby bump, holding hands of her leading man with whom she got engaged two months ago.

John Stamos and Caitlin McHugh have been together for more than two years and now they're all set to be a happy family. The pair who got engaged on October 22nd, 2017 in a romantic getaway to Disneyland announced that they're expecting their first child in December last year.

The couple made their first appearance after the baby announcement in late December, where the Full House star and the gorgeous model was spotted enjoying a morning walk with their two dogs in LA. The mother to be was trying to hide her small baby bump underneath a sweatshirt. 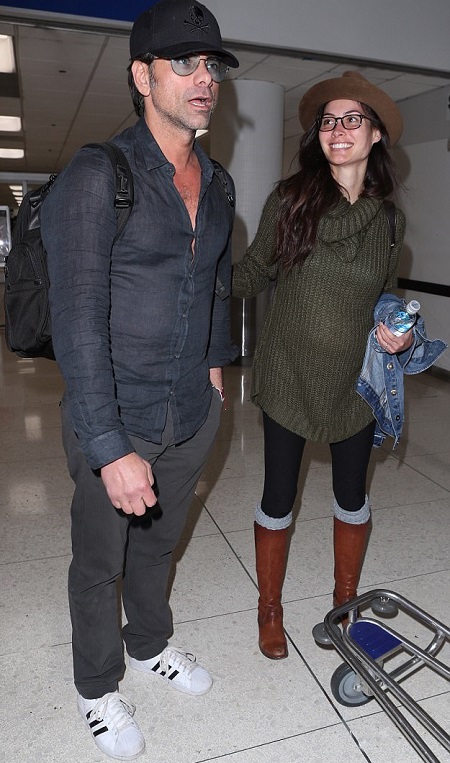 However, this time she was proudly flaunting her baby bump wearing a green turtleneck and black tight, looking absolutely radiant. She completed her look with dark brown riding boots and a pair of black nerdy glasses. 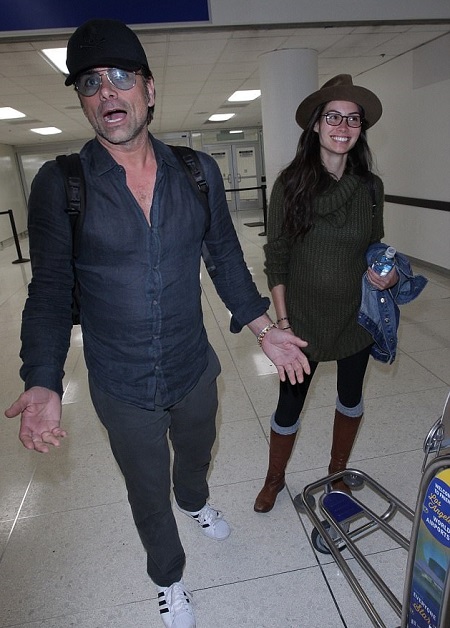 The pair got engaged last year on October
Source: BackGrid

The Full House alum spoke with People telling how he's excited about being a dad. He stated,

'I always wanted to be a dad. Clearly, I had to do some work on myself first.I will be a fun dad. I've been practicing for a long time."

The candid pair, however, has not revealed the sex of their baby and we guess they want it to be a surprise. Caitlin is due during fall this year and we are eager to see a happy healthy junior Stamos in the family.

Stamos, the best uncle on television playing Uncle Jesse on Full House and Fuller House has now become a father in real life. The actor took Instagram announcing the news with McHugh.

The 54-year-old actor who married his 31-year-old pregnant fiancee in February 2018, welcomed their first baby boy Billy Stamos two months later the major ceremony. Billy is named after his father who passed away in 1989.

He shared the image of the newborn that said,

"From now on, the best part of me will always be my wife and my son."

The new baby daddy took to Instagram to share a snap of his son laying inside the guitar case along with his red, white and blue Gibson guitar by his side. The baby is truly adorable, isn't it?

He shared the image a few weeks after celebrated 'Father's Day' for the very first time.