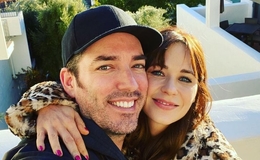 Everyone has talked about this couple's goals, aka Property Brother's star Jonathan Scott and actress Zooey Deschanel. After their connection in the fall of 2019, the lovebirds seem to be inseparable. The fans are eager to learn if the two tied the knot or not. For the details of their marriage, read the article below.

For the fans of Jonathan Scott, the handsome hunk isn't single. Scott enjoys a romantic life with American beauty Zooey Deschanel. And Scott met her on the James Corden's show Carpool Karaoke: The series in August 2019.  In the episode, two were accompanied by Zooey's sister Emily Deschanel and Jonathan's twin brother Drew Scott, as four of them sang "All My Life," "Baby  its Cold outside," "Baby more Time," and "When Will I be loved."

In addition, Scott posted on his Instagram with a heartful caption which reads, "Met some news humans today. We had fun. #carpoolkaroke". After that, Scott instantly fell in love with Zooey. So, the Canadian home expert didn't wait long & proposed to Zooey, which she happily accepted. 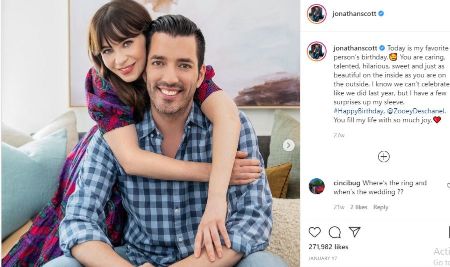 Since then, the duo seemingly remained open about their bonding and relationship. In November 2019, the two made their red-carpet debut as a couple. Further, the love birds also attended the taping of "Dancing with the Stars" with his twin brother Drew Scott and his wife, Linda Phan.

Watch the video of Zooey Deschanel gushes over boyfriend Jonathan Scott in New Year's Message below.

Likewise,  the couple also made their first-ever TV appearance together as Zooey guest-starred on Deschangel and Drew's show, Celebrity IOU. In one episode, she says, "I love spending time with Jonathan more than anything in the world.. he's the best".

Needless to say, Scott and Deschanel also attended Universal Studios Halloween Horror Nights together. Then after a few weeks, Scott posted a black and white photo of Zooey kissing him on the cheek lowered by a caption, "Simply a perfect date night to publicize the blooming fairy tale romance among the two."

Jonathan Scott had a serious affair with the Canadian radio host & development producer of Scott Brothers Entertainment, Jacinta Kuznetsov. Scott and Kuznetsov started dating in 2015 but never exchanged vows. However, the complications on both of their time schedules tore them apart. And after two and half years, they called it quit in 2018. 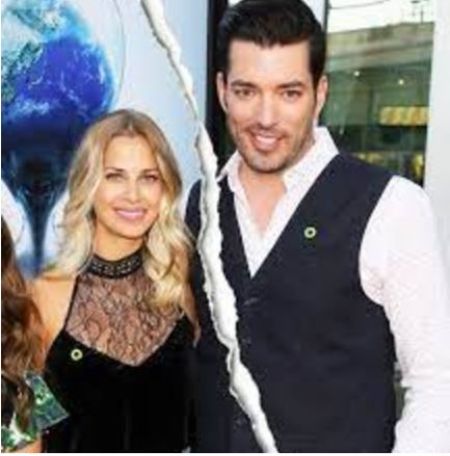 It may be surprising to many, but Jonathan Scott is also a divorced man. His previous marriage came with a crew scheduler for airlines, Kelsy Ully in 2007. But, the former couple parted ways in 2010 and got divorced after few years in 2013.

Needless to say, during an interview, Scott mentioned that Ully's job as a waitress model at the club hurt him & their relationship. Kelsy used to work long days and nights at a Las Vegas Pool Club, which Jonathan hated. In the meantime, Jonathan couldn't handle Jacinta Kuznetsov and decided to move away from her life.

In November 2020, Jonathan Scott shut down the engagement rumors. Scott cleared the media speculation and stated that he had no wedding fever. During an episode of Sirus XM podcast Covino & Rich, Jonathan said there was no truth to rumors going around that he had taken the next step in their relationship.

In that interview, Scott opened up about being pretty confident that he would ask his girlfriend to marry him before telling any reporter. Jonathan quipped of the false narratives the media had fabricated about his personal life.

Not to mention. Jonathan also penned a sweet and cheesy note to Zooey on Instagram to honor her on Valentine's Day."There's a lot to love about this lady right here. To list it, I'd need a LOT more paper. Happy Valentine's Day," he wrote. Zooey also shared a set of posts dedicated to Jonathon for the occasion. 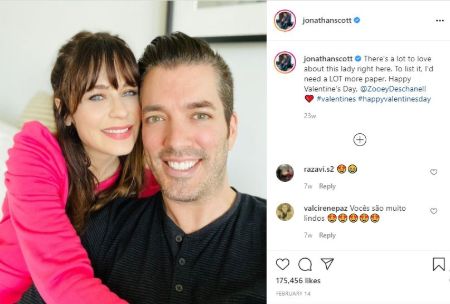 On the other hand, Zooey was still legally married to ex-spouse Jacob Pechenik but has lived separately since she started dating the co-host of Property Brother. Jacob, the former husband of Deschanel, filed for divorce after Jonathan Scott and The"New Girl" cast shared their romantic picture of date nights in October 2019.

After four years of marriage and two young children together- Elsie Gibbard and Charlie Gibbard, Joey and Jacob legally parted on September 6, 2019. But the former couple decided to be better friends, business partners, and co-parents of their children. Before Jacob, the lady Deschanel also shared marital ties in 2009 with the Postal Service leading man Ben Gibbard but ended with divorce in 2012.

Nonetheless, Jonathan Scott & Zooey Deschanel has remained together. Throughout the pandemic, the lovebirds posted plenty of updates on social media & assured the fans of their togetherness and happiness.