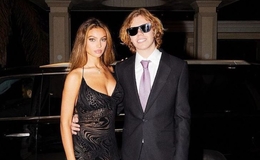 Katarina Deme celebrated her first anniversary with boyfriend Australian sensation The Kid Laroi in July 2021. But who is Katarina Deme's boyfriend- The Kid Laroi? Here's everything you need to know about him and their relationship.

TikTok influencer Katarina Deme began dating Australian Musician The Kid Laroi in 2020. The young lovebirds got together in July 2020 after meeting through a mutual friend. The rapper Kid Laroi, whose real name is Charlton Kenneth Jeffery Howard, met Katarina after moving from Sydney to Los Angeles. Many called this lovely duo new era's Selena Gomez and Justin Bieber. 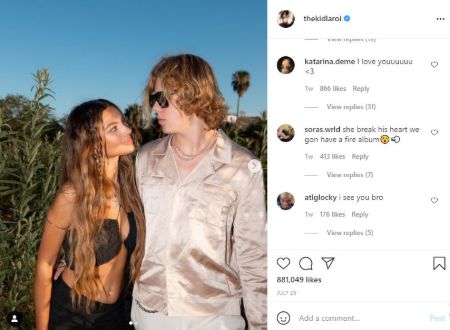 In addition, the 17-year-old rapper posted a picture of the young lovebirds together on his Instagram page to mark their first anniversary. The Aussie to his three million followers accompanied the post with the caption- "One year with you and I am happier than ever, time flies kid." Katarina responded: "I love youuuuuu."

Likewise, on July 2021, Katarina took to her Instagram page and posted a snap of the pair together & captioned it "celebrating one year with you." On February 14, 2021, Deme also uploaded a heartwarming upload writing: "Happy Valentine's Baby, been the best almost 7 months of my life :) I love you". 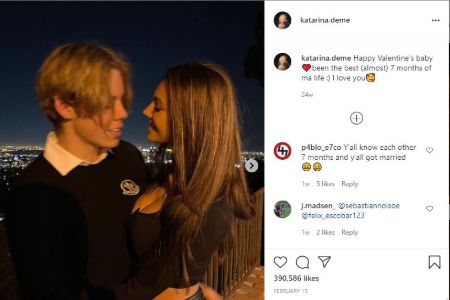 Both Katarina Deme and The Kid Laroi are currently teenagers. Also, on the Kyle and Jackie O show, Kid had acknowledged his relationship with Katarina Demes. When it comes to Katarina's soulmate, the star's debut album 14 With A Dream went public in 2018, gaining more attention as he became a finalist in the Triple J unearthed high competition. Later, Laroi garnered international recognition when his music video Let Her Go was uploaded on the Lyrical Lemonade Youtube Channel in 2019.

Katarina Deme is famous on the social media site TikTok, having amassed almost 850k followers and gained more than 7 million likes. Katarina's uploads include movie recordings, satire, and lip-syncs. Being active on Instagram @katarina.deme with over 998k followers, Katarina often posts her set pictures with her boyfriend, The Kid Laroi. As for now, the 17-year-old stunning beauty lives in Los Angeles and does modeling work.

Meanwhile, Katarina's partner The Kid Laroi entered the history books by becoming the youngest solo artist to top Australia's album charts with his popular songs -Without You, Reminds Me of You, and Diva. Laroi also landed in the No.1 spot on the Aria charts with his song Stay, collaborating with Justin Bieber. The musician already collaborated with well-known artists such as Machine Gun Kelly and Marshmellow.

Nonetheless, Katarina's engagement speculation with her soulmate came to the surface in recent days. And, one can't help but wonder if any engagement plans are budding between the young lovers.