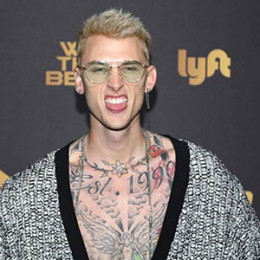 Machine Gun Kelly is the stage name of the American singer and rapper Richard Colson Baker who got this name from his fans for his rapid flow of lyrics. He has released 10 mixtapes, 2 EP's and 3 official studio albums as of date. For his single Alice in Wonderland, he won Best Music Video and Best Midwest Artist.

Machine Gun Kelly real name Richard Colson Baker on April 22, 1990, in Houston, Texas, United States. Since he had missionary parents they moved often and their family resided in many places from Egypt to Germany and usually in most parts of the United States like Cleveland, Denver, Chicago. He finally settled in Denver with his father and his aunt after his mother left them.

As for his schooling, he attended Hamilton Middle School in Denver, Colorado and during his early age, he was bullied since his father didn't have a job and was suffering from depression.

You May See: Rihanna

It was at the sixth grade when he started listening to rap and his inspiration for hip-hop was Eminem, Ludacris, and DMX. DMX's song We Right Here made him fall in love with rhyming. Furthermore, his family relocated to Cleveland and there he enrolled at Shaker Heights High School. 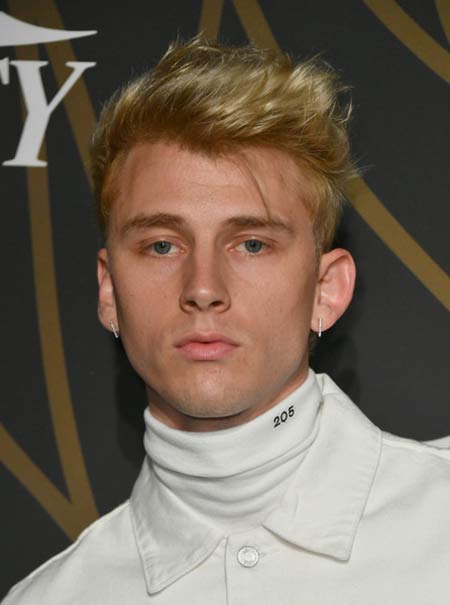 During his time there he convinced a local t-shirt shop owner to become his manager and he released his first mixtape Stamp of Approval in 2006.

The mixtape was a hit gaining him massive recognition and his fans gave him the stage name Machine Gun Kelly for his fast rap delivery. Machine Gun Kelly or MGK was the nickname of late American gangster George Kelly Barness.

Machine Gun Kelly is professionally a singer and rapper. He first started uploading homemade tracks on YouTube and then began recording songs for his album. Kelly is known for his rapid flow of lyrics and has a lyrics delivery style of his own.

In 2011, he signed with Interscope and Bad Boy record label under which he released his mixtapes namely Homecoming, 100 Words and Running and Lace Up. He managed to get the deal after a meeting with producers Sean Diddy Combs and Jimmy Iovine. 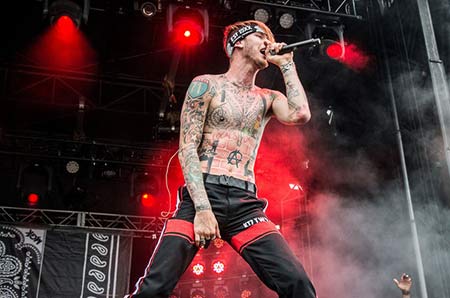 Machine Gun Kelly singing live on stage
SOURCE: Billboard
For his amazing career, he received MTV Hottest Breakthrough MC Award in 2011 and for his album Lace Up. His single Alice in Wonderland which was under the indie label, Block Starz Music proved to be a hit and was released on iTunes.

At the Ohio Hip-Hop Awards in 2010, the song won him Best Music Video and also earned him Best Midwest Artist at the Underground Music Awards the same year. Besides music, he was also cast in some movies like Beyond the Lights, Viral, Nerve, and 2018 Netflix movie, Bird Box alongside actress Sandra Bullock.

His upcoming movie project includes playing the character of Tommy Lee in the Wolstein Center show, The Dirt which is basically a biopic movie.

Machine Gun Kelly also did some works in the modeling field. He walked the ramp as a closing model for John Varvatos Fall Winter show in 2017. Besides he had been associated with Wilhelmina Modeling Agency with whom he worked on some amazing projects.

Machine Gun Kelly is estimated to have a net worth of $1.2 million and $8 million according to The Richest & Celebrity Net Worth respectively. In 2011, he made a contract deal with Interscope Record for a joint venture of $1 million.

You May Also See: Chris Brown

MGK's car collection includes some luxurious high-class cars. He owns cars like Roll Royce Drophead which cost at a range of $484k to $569k and RR Phantom ranging from $311k to $417k. His Mercedes s class cost starts from $90k and Range Rover Vogue's cost ranges from $50k to $90k.

MGK has been involved in some controversies and got into the limelight for it. In late 2018 he got in a major feud with Eminem which was all linked to the tweet MGK made about his daughter back in 2012. MGK paid for his tweet which sounded disrespectful as he was banned from radio stations.

Later on March 1, 2018, he dissed Eminem on Tech N9NE song No Reason and in its response Eminem sang a diss back by mentioning him on his track Not Alike from his album Kamikaze. The feud continued and eventually on September 3, 2018, Machine Gun Kelly released his single Eminem diss track Rap Devil. 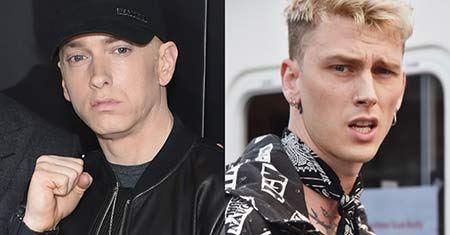 After its release fans couldn't help but wait for Eminem's reply track and eventually on September 14, he finally released MGK diss track, Killshot. This feud had the public going crazy and some even accused it of being a set up since both of them were from the same record label.

However, the feud has not stopped and is said to continue in 2019 as well.

The singer is not married as of yet but might be dating someone special that is hidden to us. MGK formerly dated a woman named Emma Cannon and in 2014 was in a relationship with actress Sevyn Streeter.

Moreover, there are rumors that he was in a relationship with Amber Rose as well who is Kanye West's ex-girlfriend.

Besides he was rumored to be dating singer Halsey who was formerly dating another rapper G-Eazy after tweets about them spending time together at a tropical beach started spreading. However, Halsey denied the rumors of her moving on with MGK and stated that the photo was clicked two years before.

Kelly has a daughter named Casie who was born in 2008 when he was just 18. However, the details of her biological mother are unknown.

Machine Gun Kelly had been addicted to heroin for two years and also smoke cannabis as it works as his source of happiness. In his songs, he mentions about these drugs and states it being of big help for his rap persona.

Machine Gun Kelly stands at a tall height of 6'3. The singer has fair skin with light brown hair and green eyes. He has covered his bodies with tattoos which is like his trademark.

On his chest, he has tattooed EST 19xx which is basically an ideological movement. Likewise, Kelly has a full Salvador Dali's painting on his back and on his belly button has inked an anarchy symbol.

Here is a video of Machine Gun Kelly talking about things with host Chelsea Briggs for Billboard.

Kelly has a daughter named Casie who was born in 2008 when he was just 18. However, the details of her biological mother are unknown.