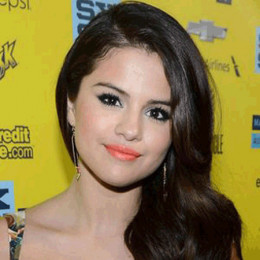 Selena Gomez is a multi-talented person. She is a talented actress, fashion designer, singer as well as a philanthropist. She stepped in to the acting world via Barney and Friends in 2000. The year 2007 led her to acting prominence letting her to appear in Wizards of Waverly Place. She also started her own band Selena Gomez & the Scene and released numbers of albums: Kiss & Tell, A Year Without Rain and When the Sun Goes Down. She has started her own fashion line and also launched a perfume in her name. She has also released solo albums: Star Dance and Revival.

Selena Gomez was born Selena Marie Gomez on July 22, in Grand Prairie, Texas, U.S. She is the daughter of Ricardo Joel Gomez and former stage actress Amanda Dawn "Mandy" Cornett. She is American and as far as her ethnicity concerned she is Mexican descent from her father side and Italian ancestry from her mother side.

Gomez was raised by her mother after her parents divorced and she explained her childhood was very hard. She has two half-siblings, Gracie Elliot Teefey and Victoria "Tori" Gomez. She earned her high school diploma in May 2010 through homeschooling.

Selena has been in numbers of relationships and has also been rumored with links with some popular faces. However, she hasn't confirmed her relationship status but nowadays she spotted several times with her ex-beau, Justin Bieber.

Gomez comes to highlight not just because of her work but also due to her charity works. She has years of involvement with UNICEF and her clothing line has also been well appreciated for being eco-friendly. They are made up completely with eco-friendly and recycled materials.