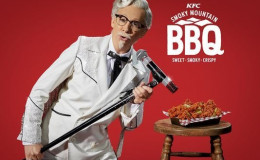 Nothing to see here, there's nothing extraordinary about the next Colonel Sanders! Actually, there is! KFC is giving the character Sanders a ''country music flair'' in their new commercials starting next week starring country music singer Reba McEntire.

Nothing to see here, there's nothing extraordinary about the next Colonel Sanders! Actually, there is! KFC is giving the character Sanders a ''country music flair'' in their new commercials starting next week starring country music singer Reba McEntire.

McEntire is the first female celebrity to play Colonel Sanders in the fried chicken chain's commercial, she exhibits colonel's famous white suit and black tie, but there's a twist involved!
In an interview with The Associated Press, McEntire said her Sanders outfit has, "a little bit of the country music flair.''

Also, McEntire has white facial hair and white wig and sings on the stage as Colonel Sanders.

Talking about the transformation, the country singer said,

''I thought the transformation was really funny. I got a big kick out of it."

She will appear in the ads till the end of April.

So far, KFC has posted one commercial on YouTube this Thursday evening:

Nothing to see here, folks. Nope, nothin’ at all. Just the same old Colonel with a new flavor of fried chicken. pic.twitter.com/ju2omd07OC

McEntire sent out a tweet of an image of herself facing the mirror with a photo of Sanders nearby:

A number of celebrities have played the character of Colonel since 2015, but McEntire is the first ever female to do it, also the first singer/musician.

McEntire is possibly the first women ever in KFC's 90-year-history to portray the Colonel, the company itself said, ''best historical minds at KFC'' could not recall a female stepping into the role.

McEntire was approached for the role in December 2017, talking about the experience, she told The AP, "I said 'Holy smokes! KFC has been a part of my life forever."

KFC said it chose the country singer because of her Southern roots as they wanted to give it a country flair. The fried chicken chain is looking to promote its new Smoky Mountain BBQ-fried chicken but with a taste of BBQ.

Reba said she has always eaten at KFC, all her life since her childhood days in Oklahoma.

McEntire sings in the ad-''I'm Colonel Sanders, the same as always. I'm definitely not a woman." She also appears in the commercial as herself in the audience section.

The new ad starring a female as the Colonel was overseen by Andrea Zahumensky, KFC's new chief marketing officer. She is reportedly trying to continue a turnaround of the fried chicken brand.
"I think this is going to be our most-loved Colonel yet," she said.