Home Article Khloe Kardashian and Tristan Thompson Relationship Timeline; Are They Still Together Despite All The Cheating Scandal?

Khloe Kardashian and Tristan Thompson Relationship Timeline; Are They Still Together Despite All The Cheating Scandal? 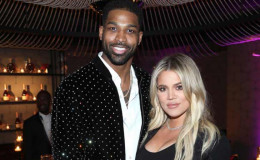 Last week, Khloe Kardashian welcomed her baby girl with boyfriend Tristan Thompson. Khloe disclosed the name of the little girl, True Thompson with an Instagram post with pink balloons and flowers all over on Tuesday.

Last week, Khloe Kardashian welcomed a baby girl with boyfriend Tristan Thompson. Khloe disclosed the name of the little girl, True Thompson with an Instagram post with pink balloons and flowers all over on Tuesday.

Amid cheating scandals of Tristan Thompson, Khloe mentioned that 'Mommy and Daddy love you True!.'

The Good American designer, 33 and the Cleveland Cavaliers player's relationship is reportedly 'hanging by a thread'. Let's get details about how their relationship started and how's everything going on!

Keeping Up With the Kardashian star and the Canadian basketball pro first sparked dating rumors in August 2016; the moment when they were first spotted leaving L.A.'s Bootsy Bellows nightclub within minutes of each other. 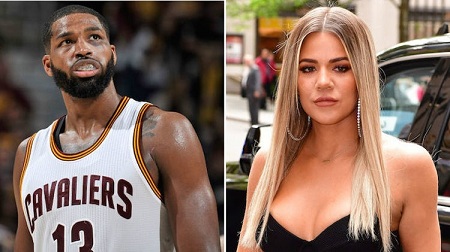 It was the time when Thompson's ex-girlfriend, Jordan Craig was pregnant with his child.

Kardashian and Thompson spent a steamy vacation on the beach of Mexico in September 2016.

Their fans were very curious whether the two were an item or just hanging around together.

The Strong Looks Better Naked author and her boyfriend celebrated Flo Rida's birthday at club LIV in Miami in September 2016. 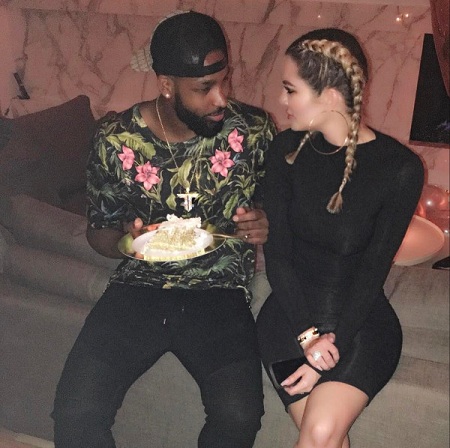 Khloe and Tristan made their relationship official during a Birthday Party
Source: US Weekly

It's the first time they first appeared together as a couple.

March 2017: Tristan Thompson's First Appearance in Keeping Up With the Kardashians

April 2017: Relationship Went On Even Stronger

Khloe revealed to ES Magazine that she has never been so serious with love like this before. She even mentioned that she would definitely marry Tristan if he asks her someday.

She also shared her wish to start a family.

"I would love to have a family. We’ve talked about it … I know for a fact that he would be an impeccable father."

"I definitely want to be a mom. But I don’t put the pressure on it. It’s not like, 'The clock is ticking.' I feel in my soul it will happen."

Khloe revealed her desire to have kids with Thompson on the season-13 finale of KUWTK. She said,

"Tristan and I definitely talk about starting a family. "He wants to have, like, 5 or 6 kids with me, and that's lovely...Now, knowing I'm not on birth control, it's scary. That's like a really big step."

That's the point when their relationship went on a smooth pace; stronger than ever.

Multiple sources reported that Khloe is pregnant with her first baby.

Though the couple didn't speak about the matter, it spread like a wildfire in the media.

Khloe finally confirmed her pregnancy on Instagram on 20th December 2017.

"My greatest dream realized! We are having a baby! I had been waiting and wondering but God had a plan all along. He knew what He was doing. I simply had to trust in Him and be patient. I still at times can't believe that our love created life! Tristan, thank you for loving me the way that you do! Thank you for treating me like a Queen! Thank you for making me feel beautiful at all stages!"

"Tristan, most of all, Thank you for making me a MOMMY!!! You have made this experience even more magical than I could have envisioned!"

Khloe revealed that the two are expecting a girl on the season 14 finale of Keeping Up With the Kardashians on 4th March 2018.

When her sister told her the news, she said,

"Everyone told me, ‘You’re going to feel what you’re having and you’ll just kind of know.’ And then when you find out it’s the complete opposite, it’s just a shock. I just was convinced that I was having a boy, so to be having a girl, it’s just like, ‘OK, that wasn’t what I thought was going on.’"

Shortly after expressing her shock, the Revenge Body host said that she and Thompson will love their baby regardless of its sex.

The Daily Mail published video in which Tristan getting personal and closer with the model, Lani Blair at a New York City bar.

TMZ claimed that Trish and the woman were being intimate and were spotted kissing at the PH-D rooftop bar in Manhattan.

As per the video, Thompson appeared to lean to kiss Blair. Sources said,

"They were holding each other and it was so obvious...Everybody knew who he was. "We talked about it and everybody watched them make out several times."

While other sources also claimed that they went to Thompson's team hotel The Four Seasons where they were spotted kissing.

"She and Tristan apparently spent a lot of time together this past weekend."

A source told ET that her mother Kris Jenner and sisters Kim and Kourtney Kardashian tried their best to make her emotionally strong as she was near to her due date.

Kardashian welcomed her first baby girl, on Thursday, 12th April at a hospital in Cleveland.

Well, the baby girl came just days after the cheating scandal of her father broke the media.

Kardashian revealed the name of her daughter four days after her birth via Instagram post. 'It's True Thompson'.

Our little girl, True Thompson, has completely stolen our hearts and we are overwhelmed with LOVE. Such a blessing to welcome this angel into the family! Mommy and Daddy loooooove you True!

"Our little girl, True Thompson, has completely stolen our hearts and we are overwhelmed with LOVE."

"Such a blessing to welcome this angel into the family! Mommy and Daddy loooooove you True!"

The room was decorated with the pink color along with balloons, flowers, and stuffed animals.

Despite the cheating scandal in media, Khloe never thought to give her daughter True her own last name.

Well, the above post also reflects that everything is OK between the two. Most probably, she has forgiven her love or what's the fact?

While we all thought Tristan won't be cheating on Khloe, yet another heartbreaking news for the new mom came soon after she gave birth to True.

In Touch has obtained a video that showed that the situation is more devastating than Khloe has expected.

An insider revealed some shocking details about Tristan's hookups with a mystery woman back in November and again in February.

Sources say that the woman is a big fan of the Kardashians. In November last year, Tristan hooked up with the woman.

"She slept with him because he’s an NBA star, but she thinks he’s hot, too. She said that the sex was good."

Three months later, the two met again. Gossip mongers stated that Tristan invited her to see him playing in another city in February. He even paid for her flight and slept with her again.

The new mom has recently broken her silence following her boyfriend's cheating with a couple of ladies. She has stated that she's giving a second chance to her relationship after welcoming their baby, True.

Let's wait and watch what goes next!